Subaru’s version of the FT-86

Wow... this is a quite suprised for the subaru's own version vs with toyota FT-86
this was cool!!! If this turns out to be true, then the difference between the FT-86 and the Subaru Coupe will be limited to aesthetics only.
It was also reported that efforts are already underway to substantially differentiate the two models, but even so, this situation leaves us confused. Is Subaru really going to be ditching its AWD layout for RWD? lets hear what you have to say about it.
Micheal Schumacher is confirm to F1 and also live with Mercedes..

According to the BBC, Michael Schumacher is negotiating with the Mercedes Grand Prix team and according to BBC F1 pundit and former team owner Eddie Jordan, Mercedes wants the seven-time World Champion as its lead driver.
“The possibility is being actively pursued and I believe it is going to happen,” Jordan told the BBC.
“It started with a meeting between Michael, Ross Brawn and Daimler chief executive officer Dieter Zetsche at the Abu Dhabi Grand Prix.
“At the moment, it is not possible for Michael to drive for Mercedes because he has a consultancy contract with Ferrari.
“But I understand he was due to meet Ferrari president Luca di Montezemolo with a view to him being released – and that it will be approved because it is in the interests of F1.
Woo.. Let's us wating for the latest news from Michael Schumacher in 2010... that's was cool for the seven-time World Champion come out of retirement and Mercedes coming back into Formula One after 54 years. hehe!!! Supporting Michael Schumacher~~

“The Type R is designed for high performance at high speed, symbolically reflected by the invigorating Championship White and its sleek black and red trademark inside. While maintaining safety for both driver and passengers, the Type R gives speed and control to drivers at their fingertips. It is a true driver’s car,” added Mr. Takahashi. 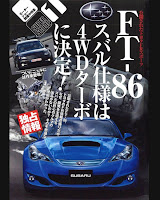 This is Subaru FT-86? oh no i cant believe it hehe... but you’re not surprised by these rumours, lets go back to when Toyota and Subaru first announced they were working on a mutual model. The two Japanese automakers made it clear back then that both models will feature a rear-wheel-drive setup.

The Plug-In Hybrid Concept aims to have fuel-efficiency figures of 55km/l or more, CO2 emissions of 42g/km or less and EV cruising range of 200km or more on a fully recharged battery. The approximate battery-charging times are 180 minutes at 100V and 100 minutes at 200V. This was cool! Half Petrol Half Battery or Fully Battery or Half Battery Mode this technology is very nice! it save natural nature good Job Toyota!

Still remember the Nissan 350Z?? haha... This new Nissan 370 Fairlady Z has won the Most Fun Award, one of the most coveted categories of Car of the Year Japan 2009-2010 in Malaysia.

Simply taken some of my picture

It's make me remember this movie it seem like Intial D but is a very nice nite racing car with the spirit of racing and modification on their car that are driving!

At last Toyota produced a Supercar

After years of development, months of teasing and a run in the Nurburgring 24-hour endurance race, the Lexus LF-A finally goes on sale for USD 375,000 and only 500 of these uber exotics will ever be sold. The Lexus LF-A has also officially dethroned the Nissan GT-R as the finest to come out of Japan. Sporting a 560hp, 4.8-liter V10 powerplant (coded 1LR-GUE), the 1,480kg LF-A demolishes the 0-100km/h sprint in a mere 3.7-seconds and goes on to a top speed of 325km/h. The driver shifts through the gears via a six-speed ASG (Automated Sequential Gearbox).

Hi! still remember Toyata Ae86? this are the new replacement for the old Toyota Ae86.
The FT-86 is powered by a front-mounted, 2-liter four-cylinder boxer engine sourced from Subaru that drives the rear wheels. Official details are still scarce but our source says that Toyota opted to equip the concept model with a naturally-aspirated version of Subaru’s 2-liter flat four that produces 150hp in the Impreza. But it is very likely that Toyota has tweaked the engine to crank out a few more horses to boost output closer to the 200 mark.
at October 21, 2009
Email ThisBlogThis!Share to TwitterShare to FacebookShare to Pinterest