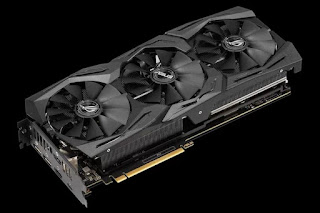 While the launch of NVIDIA’s Geforce RTX 2080 and RTX 2080 Ti graphics cards may be just around the corner, ASUS has decided to unveil its entire GeForce RTX 2070 graphics lineup in one fell swoop. Using NVIDIA’s latest Turing GPU architecture, the RTX 2070 is based on the TU106 silicon and features 2304 CUDA cores; 288 Tensor cores; 36 Ray-tracing (RT) cores, and 8GB of GDDR6 memory. Running at 14Gbps across a 256-bit memory interface.


The lineup consists of three series: ROG Strix, Turbo, and Dual. Starting with the ROG Strix, the series consists a total of three cards: 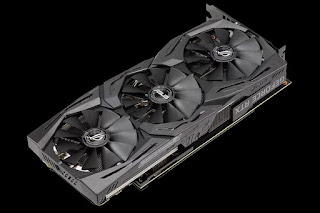 Cards under this series sport ASUS’ three-fan DirectCU III cooling solution, measures in at 30.5cm long, and takes up two and a half slots on the motherboard. It also sports the brand’s 0dB technology, which keeps the fans from spinning until the card’s overall GPU temperature goes past the 55°C. Of course, all cards under the series are also fitted with ASUS’ Aura Sync RGB lighting technology.
In term of outputs, cards under the series feature two HDMI 2.0b outputs, two DisplayPort 1.4 outputs, and a USB Type-C DirectLink output. 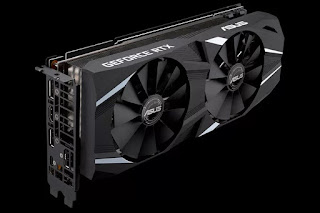 Next on the list is the ASUS Dual series graphics cards. Compared to the ROG Strix, this series graphics cards feature thicker cards that take up 2.7 slots, but sport a shorter length at 26.8cm. It also only has two fans instead of the three, but still retains the same 0dB fan technology. Ports-wise, the cards come with three DisplayPort 1.4 outputs, one HDMI 2.0b output, and one USB Type-C DirectLink output. The cards under this series are as listed below: 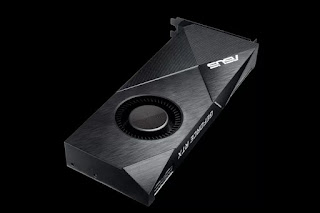 Last but not least is the ASUS’ Turbo series RTX 2070 graphics card. This card features a blower-style fan design, and sport just one 80mm dual-bearing fan and a enclosed cooler shroud design. It measures in at 26.8cm, and just like the Dual series, it takes up 2.7-slots on the motherboard. The card also features a subtle RGB stripe next to the GeForce RTX logo. Designed for those who just want an accent of RGB on their graphics cards.
Ports-wise, the RTX 2070 Turbo hosts one HDMI 2.0b output, two DisplayPort 1.4 outputs, and a USB Type-C DirectLink output.
At the time of writing, ASUS has yet to specify either the local availability of the cards or their official SRP. However, sources indicate that the cards may be launching this October. So we’ll just have to wait until then.
at September 18, 2018
Email ThisBlogThis!Share to TwitterShare to FacebookShare to Pinterest