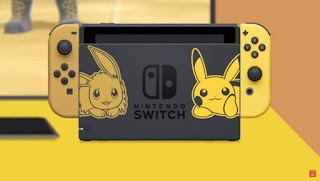 With 16 November – the date when new Pokémon games are usually released – just around the corner, Nintendo has announced a special edition of the Switch. It’s the Pokémon: Let’s Go Edition, and it will feature Joy-Cons with the colours of both Pikachu and Eevee.


But since there are two versions of Pokémon: Let’s Go, one will come with Let’s Go, Pikachu!, while another will have Let’s Go, Eevee! Both will also come with extras, like a Poké Ball Plus, and a dock with both mascot creatures printed on.
For those unfamiliar with the latest entries to the highest-grossing media franchise of all time, Pokémon: Let’s Go is essentially a modern day remake of Pokémon Yellow back in the day. At least, Let’s Go, Pikachu! is – the other version replaces the yellow mouse with Eevee, the Pokémon of choice for the rival character.
As for what’s new with the modern day remake, there are all the new-age graphics to go with the game. There are also a tie-in with the Pokémon Go mobile game. The Pokéball-throwing mechanic from the latter will be present, and you can also import certain Pokémon from the latter to the former.
The Pokémon: Let’s Go special edition Switch will launch alongside both Pokémon: Let’s Go titles on 16 November 2018. That said, Nintendo did not announce a price tag to go along with the special Switch.
at September 12, 2018
Email ThisBlogThis!Share to TwitterShare to FacebookShare to Pinterest