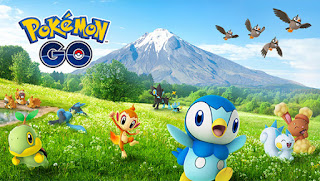 The Pokémon Company has announced that Niantic will be adding Generation 4 Pokémon to Pokémon Go. They will be added in waves, with starters being part of the first wave.

When the rollout is complete, this will see 107 new Pokémon added to Pokémon Go. This will include some legendary Pokémon as well which, assuming no new systems are introduced, will be encountered via raids.


With the advent of the fourth generation, some existing Pokémon will have more members in their evolutionary line. Some will have an added final form, while others will have baby forms.
Niantic first added Generation 3 creatures to Pokémon Go back in December 2017. While it’s a pretty good pace, it will be awhile before Pokémon Go’s Pokédex catches up with the mainline series.
at October 17, 2018
Email ThisBlogThis!Share to TwitterShare to FacebookShare to Pinterest