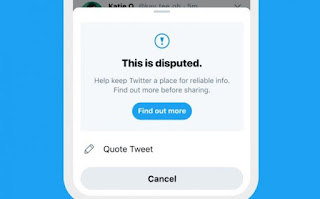 Twitter will now warn you whenever you like a false, misleading, or disputed tweet. The move is a carry-forward from the 2020 US Presidential Elections, when tweets pertaining to the event and its processes were running rampant.

Moving forward, Twitter will now display a warning on your app whenever you plan on retweeting or quoting a post that has been flagged. Twitter isn’t stopping there either and has even expanded the feature so that even “liking” a dispute tweet will prompt you about your actions. Specifically, simply tapping the heart button on such a post will trigger the warning, followed by a “Find out More” pop up. 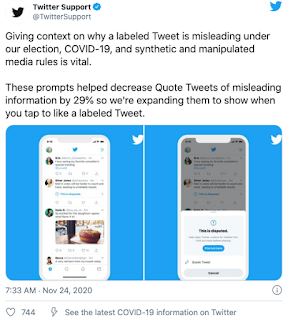 During the week after the elections, Twitter said it flagged more than 300000 tweets that it deemed as misleading. Of course, there is little to no surprise that one of the biggest contributors to those tweets was none other than the soon-to-be-former President, Donald Trump.

At the time of writing, Twitter began rolling out the feature at the start of the week, and should be available across all platforms globally before the end of the week.