Here’s What You Need To Know About Movement Control Order 2.0 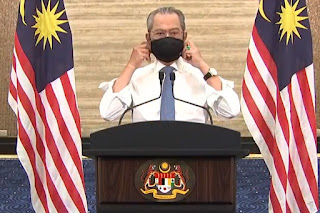 Prime Minister Muhyiddin Yassin earlier today has revealed a new set of Movement Control Order (MCO) implementation that will take place throughout Malaysia for a duration of 14 days. In his address to the nation earlier today, the move was taken to reduce the stress facing by the national healthcare system after facing a rapid increase of positive COVID-19 cases as of late.

The new implementation which has been nicknamed by many as MCO 2.0 will take place starting from this coming Wednesday, 13 January 2021 at 12:01 AM until Tuesday, 26 January 2021. While there are still plenty of details regarding MCO 2.0 that were not fully explained by PM Muhyiddin in his speech, here are important points that we feel you should take note.

In general, the MCO 2.0 implementation is being divided into three zones.

As for Perlis and Sarawak, they have been designated as the Recovery MCO (RMCO) zone.

Regardless of the zones, all interstate travels will be prohibited all over Malaysia throughout the duration of MCO 2.0.

Roadblocks will be set up at state borders throughout the MCO 2.0 period.

If you are located within the MCO zone, you are also not allowed to travel between districts and should expect to encounter roadblocks at district borders.

However, no such restrictions will be applied to CMCO and RMCO zones although you should also expect to encounter roadblocks at certain locations.

Movements Inside During MCO 2.0 Zone

Movements within the MCO zone will also be limited to 10km radius. Additionally, only two household members are allowed to go out in the same vehicle to purchase essential items.

No further movement restriction will be imposed on those within CMCO and RMCO zones.

PM Muhyiddin Yassin has also listed down five economic sectors that have been deemed as essential and will be allowed to operate even if they are located inside the MCO zone. They are:

The Ministry of International Trade and Industry alongside the Ministry of Works will announce in-depth information regarding this soon. That being said, it suffices to say that economic sectors that are not listed above have been ordered to implement work-from-home.

Meanwhile, supermarkets, clinics, hospitals, pharmacies, and banks within the MCO zone will continue to be operational.

As for dine-ins at eateries and hawker stalls, it will be prohibited within the MCO zone as only take-aways and delivery services are allowed for affected areas. However, this restriction does not apply to CMCO and RMCO areas though.

Only SPM candidates for the year 2020 and 2021 are allowed to attend their schools. More details will be provided by the Ministry of Education soon.

Social activities that involved mass gathering including religious and cultural celebration as well as meetings, seminars, and group sports are fully prohibited inside the MCO and CMCO zones. While this doesn’t apply to RMCO zones, they need to adhere to strict SOPs.

As for religious activities at the house of worships in the MCO zone, only a maximum of 5 committee members are allowed to be present at the premises. For CMCO and RMCO zones, the respective religious authority bodies of each state have been urged to define the appropriate numbers of attendees.

Outdoor recreation activities are still being allowed on an individual basis but these activities can only be performed with household members. Even then, they should maintain a gap of two meters between them and other people at all times.

Do note that while you can jog with another person (not more than two at a time though) but if you prefer cycling, you have to cycle by yourself.

As noted earlier, there are still plenty of questions regarding MCO 2.0 that were not answered by PM Muhyiddin during his speech earlier today. So, expect more details to be revealed as we get closer to the start of MCO 2.0.

In fact, the Senior Minister for Security Cluster, Ismail Sabri Yaakob has already confirmed that he will announce in-depth SOPs at his daily briefing session for tomorrow. We also expect that some government agencies will make their own MCO 2.0-related announcements as well.

All in all, keep a look for these announcements coming your way soon. For now though, please keep calm and stay safe.

at January 12, 2021
Email ThisBlogThis!Share to TwitterShare to FacebookShare to Pinterest
Labels: MCO, MCO 2.0