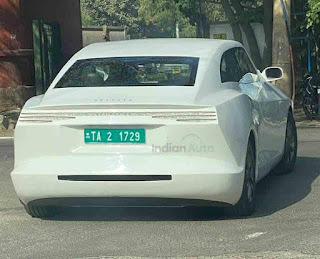 India’s very own 'Tesla', Prevaig Extinction is said to enter the mass production next year. However, it was recently spotted on the roads of Delhi. Take a look at the images here.

If you have been a loyal follower of the e-mobility startup scene, you must have known Pravaig Dynamics – a startup company that has the ambition to produce premium electric sedan to rival Tesla. The company’s first model, the Pravaig Extinction MK1 has been recently spotted on the public road in Delhi. It seems that this car has a long distance to go to fulfil the Pravaig’s ambitious claim. The Pravaig Extinction MK1 has been spotted on Delhi's public roads. The prototype was seen being driven at a low speed of 20 kmph.ALSO READElectric Vehicles 101 - How Does An Electric Car Work?From the look of it, the Pravaig Extinction MK1 prototype gets quite a quirky styling that makes it look rather a toy car. It is neither elegant enough compared with Tesla cars nor sporty enough to compete with the likes of Mercedes. However, the company has said that the design of the electric 4-door sedan is still evolving. Let’s hold our judgment until the production-ready version of the Pravaig Extinction MK1 enters the market in November next year. 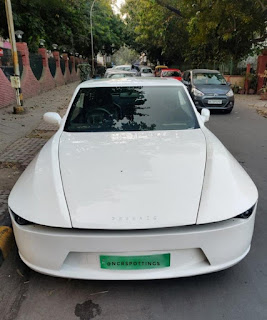 pravaig extinction mk1 front angleAs claimed by the startup automotive company, the production-spec version of the Extinction MK1 has a claimed range of 504 km thanks to its 96 kWh lithium-ion battery pack. The electric motor of the car can deliver 200 HP of power, powering the car to do the 0 – 100 kmph acceleration in 5.4 seconds and hit the top speed of 196 kmph
at January 06, 2021
Email ThisBlogThis!Share to TwitterShare to FacebookShare to Pinterest
Labels: India, Prevaig Extinction, Tesla