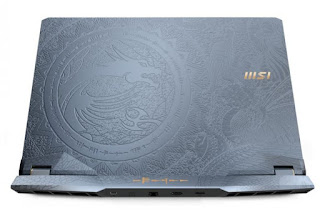 MSI officially announced its new GE76 Raider Dragon Edition Tiamat gaming laptop earlier today. The laptop was one of several new models announced by the Taiwanese-brand today, but it stands to reason that it is the model MSI has every intention of parading around.
To state the obvious and much like last year’s GE66 Raider “Dragonshield” Edition, the GE76 Raider Dragon Edition Tiamat follows a theme surrounding the mythical creature. This time around, MSI says that the pattern design that is visible on the back of its 17.3-inch panel is inspired by the Mesopotamian dragon goddess, primarily because she supposedly represents “supreme power”.
Of course, the bigger draw and more important news that follows the launch of the GE76 Raider Dragon Edition Tiamat is that, along with other models in the GE series, the laptop is equipped with NVIDIA’s latest GeForce RTX 30 mobile series GPUs. Specifically, the GE76 Raider can be fitted with either an RTX 3070 or RTX 3080. That means the laptop also gains access to new NVIDIA-based technologies, including access to WhisperMode 2.0, Dynamic Boost 2.0, and its Resizable BAR technology, among others. As for the rest of the hardware, the GE76 Raider Dragon Edition Tiamat’s CPU still uses the same 10th generation Core i9-10980HK CPU as its predecessor, the GE66 Raider. Additionally, it can ship out with up to 64GB DDR4-3200 RAM, and its display resolution is split into three options: a 4K60Hz panel, Full HD with 300Hz refresh rate, or Full HD with 240Hz refresh rate. Oh, and the laptop will also support Wi-Fi 6E.

At the time of writing, MSI did not specify local availability or pricing for the GE76 Raider Dragon Edition Tiamat.