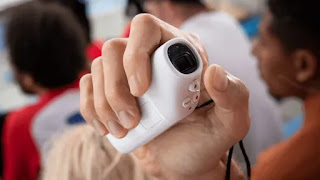 Canon has announced that the PowerShot Zoom will be arriving in Malaysia later in April. The device was originally unveiled last year in September and was also a Japan-only exclusive up until recently. It is also the only PowerShot-branded product to be presented in a monocular-like form factor, enabling for easy one-handed controls.
As a quick recap, the Canon PowerShot Zoom is a pocket-sized camera that weighs only at 145g – featuring a 12.1MP 1/3-inch CMOS sensor, paired with the company’s own DIGIC 8 processor. With that, it is capable of recording Full HD videos at 1080/60p, and snapping high resolution photos at up to 10 frames per second. Unfortunately, 4K recording is not in the cards for the Zoom.

The camera also comes with several built-in features such as Face Detection autofocus, built-in stabilisation, and a maximum ISO of 3200. True to its namesake, it offers an impressive zooming range equivalent to 100-400mm lenses via optical, and up to 800mm digitally. 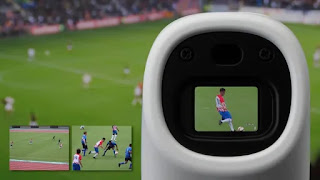 For shot framing assistance, the PowerShot Zoom features a 0.39-inch electronic viewfinder (EVF) that has a resolution of 2.36 million dots, which Canon says is similar to the one equipped on its EOS RP mirrorless camera. As for connectivity, the Zoom comes with Bluetooth and WiFi support which allows you to pair it with a smartphone to review captured photos or videos.

In terms of battery life, Canon says that the monocular camera – when fully charged – is able to provide approximately 60 minutes of movie record time, 150 still shots, and a live viewing time of 70 minutes. Other than that, it also includes a microSDXC card slot,  a USB-C port for charging and data transfer, and a wrist strap attachment. 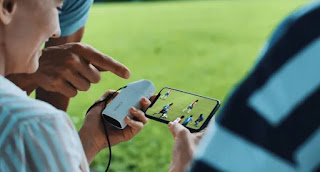 Despite looking and functioning like a spy gadget, the Zoom is intended to let users get closer to the action – regardless whether at a football match, concert, or even birdwatching. That being said, we do not condone spying or any similar acts that intrude on privacy.

The Canon PowerShot Zoom will retail at RM1,379 once it lands in Malaysia later in April.