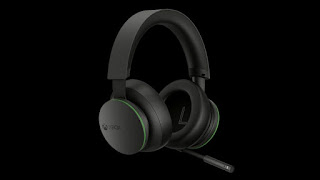 Microsoft has announced the Xbox Wireless Headset that it will be launching next month. It is naturally made to work with the Xbox Series X and S, but it also works with PCs and mobile devices.
The Xbox Wireless Headset connects to all the devices listed above via Bluetooth 4.2. It is also built with support for Windows Sonic, Dolby Atmos and DTS Headphone:X sound tech. It has a battery life of 16 hours, and Microsoft claims that 30 minutes of charging provides four hours of audio life. Charging to full takes three hours while not in use, which sounds pretty long by today’s standards.

The drivers of the Xbox Wireless Headset consists of 40mm neodymium magnets and paper composite diaphragm. Pretty standard for headphones these days. Though it comes with a lot of extra bells and whistles with emphasis on party chat. These include a game/chat balance dial in addition to the volume dial. The adjustable boom mic also lights up when it is turned on.

The Microsoft Xbox Wireless Headset is set to launch on 16 March, for a price of US$99.99 (~RM404). That being said, it will likely not be made official here, the same way the Xbox consoles are not brought in officially by the company.