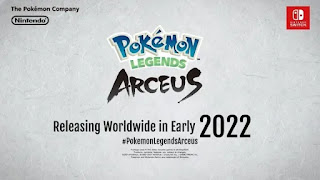 The Pokemon Company announced the much teased remakes of the fourth generation games, Brilliant Diamond and Shining Pearl. But Pokemon Legends Arceus is definitely the more important game announcement by the company. This is simply because it’s the game that finally takes the franchise into the open world.

Pokemon Legends Arceus is set in the same region as the fourth generations games, Sinnoh. But rather than the modern setting that fans recognise, this game brings players back in time to a more feudal looking age. The Pokeballs also look feudal, being obviously made of wood.

And according to the game’s dedicated website, you’ll be creating, and completing, naturally, the region’s first ever Pokedex. Which sounds like a lot of retconning. To hammer this point home, your starters are the second generation fire type starter Cyndaquil, the seventh generation grass type starter Rowlet, and the fifth generation water type starter, Oshawott.

From what little gameplay the Pokemon Legends Arceus showed, it looks like there will still be turn-based battles. Or, at least against stronger creatures. For others, the trailer implies that you can catch them in the wild without the need for battles to weaken them first. The open world itself is slightly reminiscent of The Legend of Zelda: Breath of the Wild, and of Capcom’s Okami.

Pokemon Legends Arceus is slated to be released for the Nintendo Switch in early 2022. For fans suffering from franchise fatigue, this may be the entry to get you excited again.