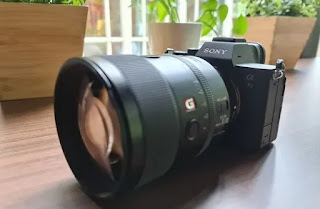 Sony has announced that its A7S III camera now includes the S-Cinetone colour preset for video recordings, thanks to a firmware update that is available today. This comes as a surprise, as the company had recently launched the FX3 a few days prior, which most considered to be the former‘s Cinema Line counterpart in terms of specifications.
For those unfamiliar, the S-Cinetone is a colour preset that is regularly featured on the Cinema Line models, including the FX9 and the aforementioned FX3. It is based on the popular Venice Colour Science profile from the company’s Venice flagship cinema camera, which – in Sony’s words – provides a “cinematic look with a film like [colour] and pleasing rendering of skin tones that has gained such a good reputation in the market”. S-Cinetone, on the other hand, is designed to allow filmmakers to quickly process high quality colour graded footage without the need for expensive post production.

With this recent update, it appears that Sony has no intention of leaving its A7S III in the cold – despite the recent launch of the FX3, which is viewed as an ideal option for compact-sized videography. The inclusion of the S-Cinetone would slightly upgrade the former’s video shooting capability to be as close to its Cinema Line counterpart – but the fact remains that the FX3 still triumphs over it, thanks to the built-in active cooling system which enables for high resolution video recordings up to 13 hours uninterrupted. Regardless, consider it as a bit of “fan service” from Sony for A7S III users.

As mentioned earlier, the camera’s latest firmware is available now and its installation file for both Windows and Mac platforms can be downloaded via Sony’s official website. However, keep note that the Mac version of update, as pointed out by the company, does not support macOS Big Sur at this time.

By the way, the A7S III isn’t the only camera from Sony’s Alpha series to feature the popular preset. The S-Cinetone profile can also be found in the company’s recent high-end shooter, the Alpha 1, which will launch in Malaysia in April.