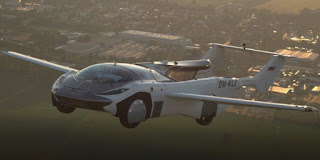 The modern day perception of a “flying car” is different from what most of us have imagined while growing up. Most concepts or prototypes of such vehicles proposed by various companies would look like oversized yet pilotable drones, with some even sporting huge table fan-like propellers.

But not the Slovakian-made AirCar by Klein Vision, which literally is a car with wings that unfolds when used as an aircraft. Sure, it’s not in the same line as the DeLorean from Back To The Future II or a Spinner from the Blade Runner movies. However, it is fully functional and in fact, had just recently completed its inaugural inter-city flight between the Nitra and Bratislava airports in Slovakia – a world’s first for any modern day flying car.

Company founder and AirCar inventor, professor Stefan Klein, said that the hybrid vehicle has been in development for more than 30 years. He added that the model used for the journey has previously recorded 142 successful landings and over 40 hours of test flights.

Klein Vision’s flying car is a petrol-powered two-seater equipped with a 160HP BMW engine, which also features a fixed-propeller and comes with a ballistic parachute safety mechanism in case of emergencies. Klein says it is capable of reaching a cruising speed of 170km/h in the air (slightly below the 190km/h limit) and has flown at 8200 ft, as well as achieving steep 45-degree turns as part of its maneuverability testing. 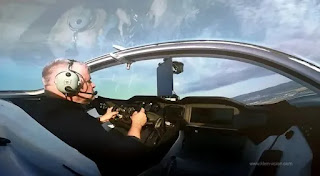 But unlike the modern flying car concepts mentioned earlier, the AirCar lacks VTOL (vertical take-off and landing) capability, therefore requiring an actual runway for takeoff and landing. This drawback will surely definitely disappoint those hoping to skip traffic jams by taking off into the air. 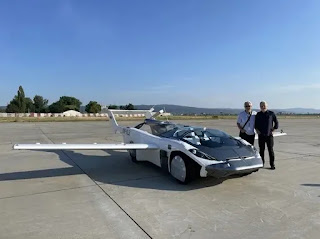 The maiden flight saw the AirCar travelling more than 100km which took around 35 minutes from start to finish, with Klein himself behind the wheel. Upon its safe landing in Bratislava airport, as noted by various news outlets, the inventor clicked a button to fold in the wings into the vehicle’s back and simply drove it home. 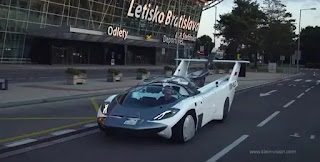 Thanks to its successful journey, Kelin is confident that the AirCar is ready to exit the concept stage and enter pre-production. He added that a revised version, dubbed the AirCar Prototype 2, will feature a more powerful 300HP engine and is slated to receive the European Aviation Safety Agency’s CS-23 aircraft certification, as well as an M1 road permit.
at July 22, 2021
Email ThisBlogThis!Share to TwitterShare to FacebookShare to Pinterest
Labels: Actual, an, Completed, First, Flight, Flyingcar, Has, Inter-City, its, Successfully