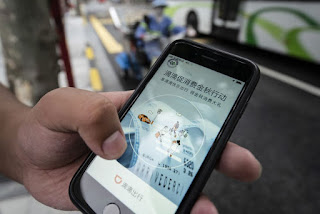 China’s cyberspace regulator ordered app stores to remove Didi Chuxing, dealing a major blow to a ride-hailing giant that just days ago pulled off one of the largest U.S. initial public offerings of the past decade.The Cyberspace Administration of China announced the ban Sunday, citing serious violations on Didi Global Inc.’s collection and usage of personal information, without elaborating. That unusually swift decision came two days after the regulator said it was starting a cybersecurity review of the company.
That effectively requires the largest app stores in China, operated by the likes of Apple Inc. and smartphone makers Huawei Technologies Co. and Xiaomi Corp., to strike Didi from their offerings. But the current half-billion or so users can continue to order up rides and other services so long as they downloaded the app before Sunday’s order.The surprise probe and rapid decision by China’s powerful internet regulator piles on the scrutiny of Didi over issues ranging from antitrust to data security. The company has been grappling with a broad antitrust probe into Chinese internet firms with uncertain outcomes for Didi and peers like major backer Tencent Holdings Ltd. It lost as much as 11% of its market value at one point on Friday, after the watchdog revealed its investigation.More broadly, Beijing has been curbing the growing influence of China’s largest internet corporations, widening an effort to tighten the ownership and handling of troves of information that online powerhouses from Alibaba Group Holding Ltd. to Tencent and Didi scoop up daily from hundreds of millions of users. The regulator on Sunday ordered Didi to rectify its problems following legal requirements and national standards, and take steps to protect the personal information of its users.
at July 04, 2021
Email ThisBlogThis!Share to TwitterShare to FacebookShare to Pinterest
Labels: Banned, China, China'sGrab, DiDi, in