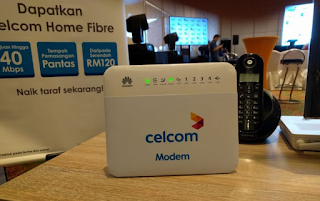 Celcom has announced a price reduction for its fiber service in Sabah which was originally launched last year. Not only that, the company has also revised the service offerings which will soon be made available not only at higher speed but at a much lower price.

Starting on 16 September, Celcom Home Fibre service in Sabah will be available in two plans. One being the 40Mbps plan which cost RM 80 per month while at the same time, customers can also opt for the 100Mbps plan that is priced at RM 120 per month.

As a comparison, Celcom Home Fibre service in Sabah previously costs RM 120 for 10Mbps while the 20Mbps and 40Mbps plan are priced at RM 150 and RM 180 respectively. Celcom also previously offered 100Mbps plan at RM 280 per month.
The data quota for the service will continue to be unlimited under the new plan alongside free installation and wireless router. Also remains the same is the domestic call charge which is 10 sen per minute to any network.
For more information, just head on to Celcom’s official website.
at September 15, 2018
Email ThisBlogThis!Share to TwitterShare to FacebookShare to Pinterest