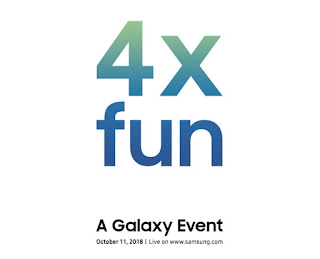 You might have thought that after Galaxy Note 9, Samsung might have chosen to be done for the year and focus its effort on the 2019 flagship instead especially that the company didn’t announce any new Galaxy devices at the recently concluded IFA 2018. As it turns out, that is not going to the case at all.
The Korean giant yesterday revealed that it will be launching a brand-new Galaxy product on 11 October. Unlike the announcement for the Unpacked event last month where the company actually includes a partial picture of the S Pen, Samsung didn’t provide any obvious clue this time around.
Aside from the acknowledgment that it is going to be a Galaxy device, the only thing that Samsung include in the revelation is that it will revolve around “4x fun”. That short sentence alone opened to plenty of speculations including the possibility of a Galaxy device with four cameras.
Then again, Samsung devices are quite prone to be leaked before they are officially revealed to the world. Hence, don’t be surprised that we might hear something regarding it before 11 October although do keep the date in your calendar if you are curious to know what Samsung is going to reveal on that day.
at September 15, 2018
Email ThisBlogThis!Share to TwitterShare to FacebookShare to Pinterest