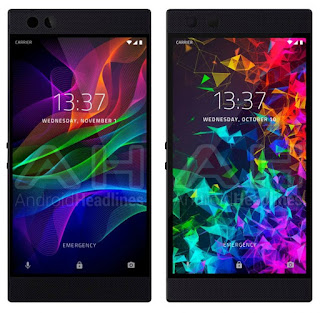 Last week, Razer’s financial report pretty much confirmed that a successor is on the way. Today, Android Headlines has obtained a leaked render of the successor in question. And from what we can see, the Razer Phone 2 looks a lot like the first one.


From the render, it’s really difficult to tell one from the other. Unless you were actively looking for it, you wouldn’t be able to tell the difference. In fact, unless pointed out, we doubt anyone would be able to tell that the side bezels were slightly thicker and that the front facing camera configuration was flipped.
These two very subtle differences aside, pretty much everything else is the same. The top and bottom bezels are as thick as ever to accommodate really impressive stereo speakers. This especially sticks out in a post-iPhone X age where manufacturers are all trying to get rid of bezels.
The leaked render is missing a picture of the back of the phone, so it could be as barren as the first one, or it could be adorned with all sorts of embellishments.
Another thing that may send speculators wild is the date on the render. We’re looking at 10 October, which could possibly mean a launch next month, with the emphasis on “possibly”. But with Razer not giving an official word just yet, we can only wait and see if this really is the case.
at September 15, 2018
Email ThisBlogThis!Share to TwitterShare to FacebookShare to Pinterest