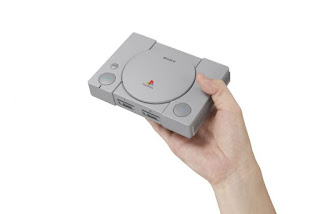 The PS Classic will come pre-loaded with 20 games inside, including all-time favourites like Final Fantasy VII, Tekken 3, Wild Arms and R4: Ridge Racer Type 4. This may also explain the PS4’s lack of backward compatibility with older generation games. On that note, Sony says you won’t be able to add more games into the console, much like the NES Classic.

Games aside, it will also come with two controllers, a HDMI cable to connect it to your TV, and a USB cable. The strange thing about it is that you use said USB cable to power the console, but it doesn’t come with its own USB AC adapter.

For obvious size-related reasons, you wont be able to use accessories designed for the original PlayStation with it. This includes memory cards, which implies save files will also be stored internally alongside the pre-loaded games.
The PlayStation Classic will be officially available in Malaysia starting 3 December 2018, and will retail for RM429. They will also be released in limited quantities, so you’ll have to fight for it, metaphorically speaking.

at September 20, 2018
Email ThisBlogThis!Share to TwitterShare to FacebookShare to Pinterest