YouTube Is Rolling Out Vertical Ads For Mobile Devices

If we know anything about vertical videos, it’s the fact that they aren’t liked. We say this simply based on the reactions we got to our previous report on YouTube displaying vertical videos in fulls-screen mode on iOS. But it looks like it’s a format that’s here to stay. Mashable reports that the video streaming service announced a new vertical ad format.


According to a statement by Google, more than 70% of YouTube watch time happens on mobile devices, and that “it’s important to adapt to their viewing behaviours.” To that end, advertising brands can now upload vertical video ads that will conform to a viewer’s mobile screen. 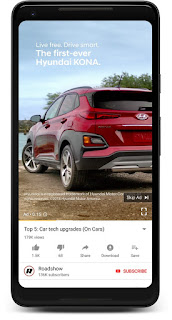 To make the point, the company showcased a Hyundai vertical ad that was being tested. This was in addition to the traditional horizontal ads for the duration of the campaign ad. YouTube’s numbers indicated “a 33% percent lift in brand awareness and a nearly 12% lift in consideration” for the Hyundai campaign. These looks like numbers that will make advertisers happy, and make YouTube money.
On the ad front, this is merely something to complement existing horizontal ads. In other words, you’ll just be seeing different versions of the same ad depending on the way you hold the phone. It doesn’t signal any change for the videos uploaded by channels you follow, but it does mean that vertical videos are here to stay.

at September 20, 2018
Email ThisBlogThis!Share to TwitterShare to FacebookShare to Pinterest