(Petaling Jaya 25th) A Chinese woman angered Malaysians as "unqualified" during a live broadcast,
saying that if there were no chinese, Malaysian would have starved to death, causing heated
discussions among netizens! 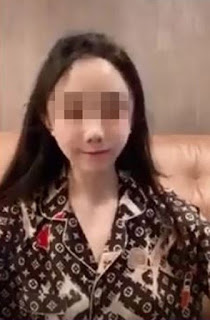 The Chinese woman posted a video on Douyin about "Away from Overseas Chinese and Live
Forever", detailing the weakness of her Malaysian ex-boyfriend.
After the video was resposted to Facebook, many Malaysian netizens left messages to encircle and suppress the entire boat.
A "fan" informed the woman that her video was attacked by netizens, so she released another video to choke Malaysian netizens back.
"I don't know which dog was caught, and then put it on Facebook, it'e just getting hot."
"Underneath I saw many overseas Chinese scolding me, and the scolding was very unpleasant! We Chinese can't scold those words. Only overseas Chinese can scold me."
The woman angered that these netizens were extremely lacking in quality, and satirized the so-called qualities of Malaysians that they were just talking about them. In fact, they were "dirty inwardly" and often acted like a dog.
One of the netizens left a message "Wuhan Pneumonia". The woman revealed that she had quarrelled with her ex-boyfriend because of this, "I think you overseas Chinese, ignorant!"
"You Malaysia, it seems that it is really cheating, harming, and coercing. It is your traditional virtue.
I guess it is."
"For what I said, I was taken care by others, thank you! I was taken care of by your father! I'am your second mother! Just call me your second mother, and iI will be your mother in the future! I will be more respectful in the future, can you? Your dog stuff."
The woman also ridiculed that if there is no Chinese support and no Chinese doing business in Malaysia, "you people must starve to death!"
She also ridiculed that Malaysians earn two to three thousand ringgit a month, but they are still "as if they have made two to five to eightly thousand ringgits".
She "secretly scolded" her ex-boyfriend for picking up a girl until she dies, thinking that her status as an overseas Chinese is still great, and it would be shameless to fool this woman today and tomorrow.
"It's disgusting when you look at it. Speaking Mandarin is not standard, and there is a mouthful of English; if you want to trace back, you are also a Chinese, don't think you are a foreigner, and you still charge that ocean garlic, bah!"
The video once again caused heated discussions among Malaysian netizens, "nonsense" and "don't be familiar with her", and some people remembered thier nationality and responded, "We are Malaysian, not Chinese"!
at November 24, 2020
Email ThisBlogThis!Share to TwitterShare to FacebookShare to Pinterest