Young people got screwed over by lockdowns.. 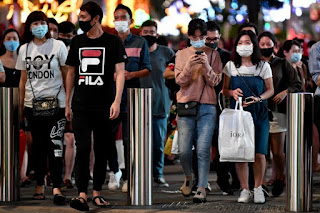 SINGAPORE - Young people around the world are suffering far more from the fallout of the Covid-19 pandemic than are other groups, judging by a recent global survey by the Financial Times (FT) of more than 800 people aged between 16 and 30.

It found that their levels of anxiety about the future and their resentment towards the older generation are on the rise, with the pandemic exacerbating many of the problems they were already facing - including low wages, stagnant job markets and rising student debt.In one American family of 10 young-adult siblings in New Jersey, five have been on therapy since the pandemic began, and the remaining five have moved in with their parents."Someone had a breakdown about once a week," Ms Mary Finnegan, 27, told the FT.Moving home was "like a return to homeschooling: No boys, no play dates, nowhere to go, except home and the liquor store", she said.In Maharashtra, India, Ms Komal Kadam, 28, has been worried since she lost her job in March. Until then, she had been her family's sole breadwinner."I am scared of everything," Ms Kadam said. "Can I get a new job? How will I pay my loans? (There are) lots of things on my mind."Those below the age of 26 are 2½ times more likely to be unemployed because of the pandemic compared with the 26-64 age group, data from the Organisation for Economic Co-operation and Development (OECD) shows.About half of those who are still holding on to their jobs say their earnings have dropped. Many have had to dip into their savings.A poll by market research firm Ipsos Mori of more than 14,000 adults in October showed that people below 35 were more likely than their older peers to feel that things in their country are out of control right now.Loss of faith in democracyThe young are also increasingly losing faith in democracy.A study from the University of Cambridge's Centre for the Future of Democracy, which looked at polls conducted between 1973 and 2020 of four million adults from 75 countries found a significant downward trend in satisfaction with democracy among younger people.Respondents to the FT survey - except for some Europeans and Asians - said that they were disappointed in their leaders for their poor handling of the pandemic."The world was saying A and Brazilian politics were screaming Z," 29-year-old Brazilian Danilo Ventura told the FT, adding that he and his wife abided by social distancing rules under orders from the regional government in Sao Paulo even though President Jair Bolsonaro continued attending crowded events.The lack of coordinated direction and timely action from the leadership has seen Brazil hit with the second-worst death toll from Covid-19, after the United States.In Glasgow, Scotland, 28-year-old John lamented: "The airports were opened too long. The messaging on masks was disgraceful… We really are handling this terribly."As the present chaos across the globe translates into growing disgruntlement among young people towards their leaders and older generations, Canadian Polina R., 30, summed up the mood among them."We're not in this together, millennials have to take the brunt of the sacrifice."Stronger resolve to improveNot all is lost, though.The pandemic appears to have reinforced the younger generation's resolve and vision to build a better future, proving a motivating factor for many to take action to positively impact their communities, Deloitte's annual Global Millennial Survey released in June showed.It surveyed more than 18,000 young people across at least 43 countries."Despite uncertain and discouraging conditions, millennials and Gen Zs express impressive resiliency and a resolve to improve the world," Ms Michele Parmelee, Deloitte's Global Chief People and Purpose Officer, said."As we rebuild our economies and society, young people will be critical in shaping the world that emerges."A World Bank campaign targeting youth attitudes and perspectives amid the pandemic also found resilience a resonating theme in the feedback it received."For some, this pandemic is a rainbow, and for some, a dark cloud," Mr Soham, a youth respondent from India, said in a video submission to the World Bank campaign. "All of us know that both don't stay for long."
at November 24, 2020
Email ThisBlogThis!Share to TwitterShare to FacebookShare to Pinterest