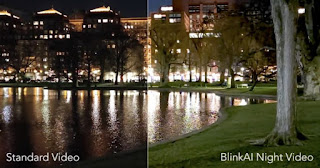 Xiaomi last night launched its new Mi 11 flagship, which is also the first smartphone to feature the newly-introduced Qualcomm Snapdragon 888 chipset. Along with the high-end SoC, the company also showcased the phone to feature several innovative tech. One of which is the  inclusion of Night Video mode which allows for low light enhancements to be processed in real-time thanks to AI machine learning.
The tech itself is a collaborative effort between Xiaomi and Boston-based AI-powered imaging enhancement solutions company BlinkAI. To showcase its machine learning tech, the latter had recently released two videos featuring the Mi 11’s Night Video in action which we have included throughout this article.
Low light enhancements in smartphones is nothing new, but most of which that are found in current generation devices are mainly photography focused rather than video. Furthermore, the process requires the user to keep their phone still while it is capturing light over a long period and then merging multiple frames together to produce an enhanced image in post. The Xiaomi and BlinkAI developed Night Video, on the other hand, is the first to enable low light enhancements in real-time for video recording via AI machine learning.

BlinkAI says that the tech is built on the neural network framework that attempts to mimic how the human visual system functions, and claims that its AI-powered computational solutions enable up to five times application of illumination. The company’s processing software also works alongside Qualcomm’s Neural Processing Unit on the Snapdragon 888, which enables it to apply machine learning algorithms to improve the quality of low light videos in just milliseconds.

The Xiaomi MI 11 smartphone is currently available in China, with a starting price of RMB  3,999 (~RM 2,479). The company has yet to announce the new flagship’s availability for the global market.

at December 30, 2020
Email ThisBlogThis!Share to TwitterShare to FacebookShare to Pinterest
Labels: Xiaomi Mi 11