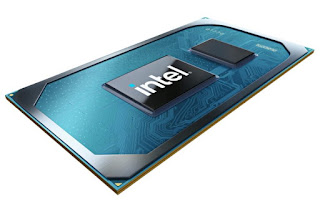 Not to be outdone by its close competitors from Team Red and Green, Intel earlier this week has also turned up at the first-ever virtual CES with several new products. Among them are several new models for its 11th Gen Intel Core family which are being grouped as the Core H35 Series.
As you can see from its name, the Core H35 Series chips are being positioned under the performance-oriented Core H Series. What made the Core H35 Series chips rather unusual is that they are specifically designed for a specific type of gaming laptops that being referred to by the company as the ultraportables. 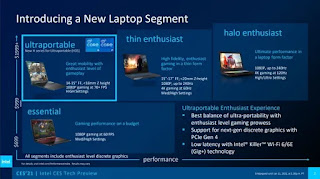 The company stated that ultraportable gaming laptops would have 14 to 15-inch form factor alongside a thickness of less than 18mm. These machines also should be able to generally deliver framerate of more than 70 fps with high graphics settings in Full HD resolution.

At the moment, the Core H35 Series contained three chips altogether with all of them being 4-core 8-thread processors with maximum TDP of 35W (which is the reason behind the H35 Series’ name): 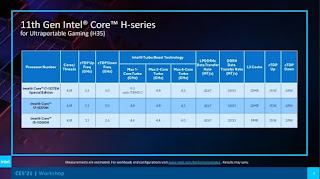 Interesting enough, Intel claimed that the highest tier model of the series which is the Core i7-11375H Special Edition can outperform the AMD Ryzen 7 4800HS and Ryzen 9 4900H in single-threaded performance. The company also said that the chip can match the Core i9-10980HK even though running at lower TDP: 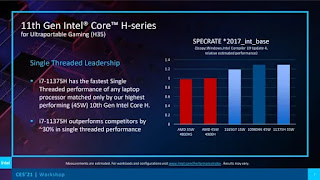 Naturally, major OEMs such as Acer, ASUS, Dell, HP, Lenovo, MSI, and even Vaio are already working to deliver more than 40 products powered by these new 11th Gen Intel Core H35 Series processors within the first half of this year. Some of them have even been announced at CES 2021 such as the Acer Predator Triton 300 SE. 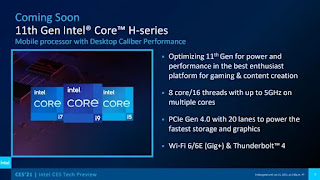 As the full-blown 11th Gen Intel Core H-Series processors which will include an 8-core 16-thread processor that can deliver multi-core clock speed of 5GHz, they will only be announced at a later date but still within Q1 of 2021.
at January 17, 2021
Email ThisBlogThis!Share to TwitterShare to FacebookShare to Pinterest
Labels: 11th Gen Intel Core H35, for Ultraprotable Gaming Laptops, Intel