Agong Declares State of Emergency In Order To Curb COVID-19; Will Last Until August 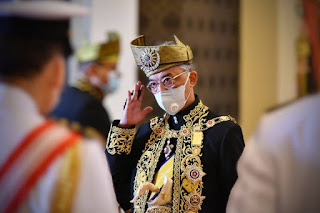 The Istana Negara today has announced that the Yang di-Pertuan Agong Al-Sultan Abdullah Ri’ayatuddin Al-Mustafa Billah Shah has consented to having an emergency declaration due to the rapid increase of COVID-19 infections in Malaysia. This came barely a day after yesterday’s announcement of the Movement Control Order 2.0.
The announcement also stated that the state of emergency will last until 1 August 2021 although the exact starting date has yet to be revealed. However, the King has also stated that the emergency can be ended earlier if the daily rate of COVID-19 positive cases can be contained and reduced effectively. 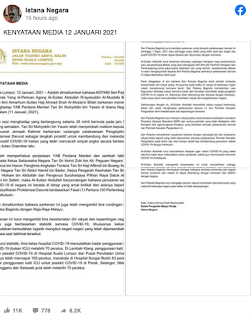 The King has also consented to the establishment of an independent committee that will include MPs from the government and opposition together with health and related experts. This committee will recommend to the King if the emergency order can be ended sooner than 1 August.

Meanwhile, PM Muhyiddin Yassin has been scheduled to announce the state of emergency on live TV broadcast at 11:00 AM today. So, expect more details with regards to the emergency declaration expected to be revealed soon.

at January 12, 2021
Email ThisBlogThis!Share to TwitterShare to FacebookShare to Pinterest