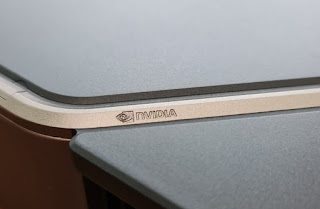 At this stage, news and rumours surrounding NVIDIA’s inevitable GeForce RTX 30 series GPUs for gaming laptops are a dime a dozen, but not one of them has managed to provide any further or specific details for any of the SKUs. At least, that was the case until recently.
According to leaks involving the ASUS ROG Zephyrus Duo gaming laptop, the Taiwanese company’s top-tier gaming laptop is going to be fitted with an NVIDIA GeForce RTX 3080 mobile GPU. However, the mobile graphics will be based on the GA104 GPU, not the GA102 GPU that is used in the desktop version of the RTX 3080 and RTX 3090.
To that end, this means that the RTX 3080 Mobile is relegated to using GDDR6 memory only and based on the reports, it will have 16GB worth of GDDR6 graphics memory. In addition, the GPU will also ship out with 6144 CUDA cores, which is 2600 CUDA cores less than the desktop variant. 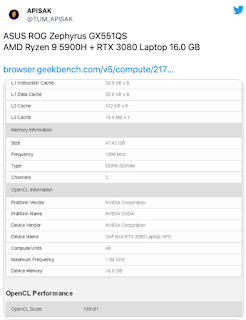 Additional details about the GPU listed on Geekbench points to the card running at a clockspeed of 1.54GHz and a OpenCL score of 139181 points; that puts the GPU squarely behind the desktop RTX 3070 graphics card.
Evidence of NVIDIA’s mobile variant of its Ampere GPU first emerged nearing the end of last year, when news surfaced that several of ASUS’ next-generation TUF Gaming and Zephyrus gaming laptops would be running on a variety of AMD’s Zen 3 Ryzen 5000 Series mobile CPU. One CPU that garnered attention, specifically, was a Ryzen 9 5900HX that will reportedly support overclocking on a laptop. Making it a direct competitor to Intel’s own HK-series extreme mobile CPUs. 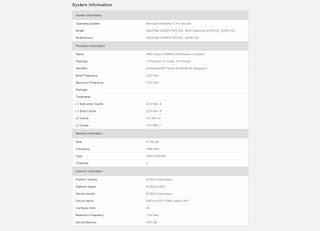 Back then, the report merely mentioned that the laptop would be powered by a “next-generation” NVIDIA GeForce GPU, but did not specify what exactly they were. That said and given the trend and NVIDIA’s cadence, it became obvious that the new laptops would be fitted with mobile versions of the GPU maker’s RTX 30 series graphics.

In any case, NVIDIA will be hosting a special GeForce RTX livestream on 12 January, meaning it’s a guarantee that we’ll learn more about the company’s plans then.