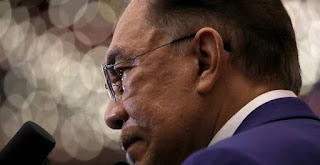 Malaysian opposition leader Anwar Ibrahim has called on Members of Parliament (MPs) to write to the king and plead for the emergency proclamation to be withdrawn and for the parliament to be convened as soon as possible.
In the statement dated Jan 14 (Thursday), Mr Anwar said parliament should reconvene before Jan 31 to debate the state of emergency, COVID-19 as well as Malaysia’s current economic crisis.
In an accompanying memo to the MPs, he wrote: “I proposed that the honourable MPs submit their appeals speedily before Friday. I have prepared a draft of the letter to be presented to His Majesty which can be amended according to your consideration or the party’s.”
On Tuesday, Malaysia's King Al-Sultan Abdullah Ri'ayatuddin Al-Mustafa Billah Shah declared a state of emergency across the country to curb the spread of COVID-19.
The emergency will last until Aug 1 or earlier depending on the state of coronavirus infections, said a palace statement.
"Parliament will not sit until a time determined by the king. Throughout the duration of the state of emergency, no general election, state election or by-election will be held," said Mr Muhyiddin in a live address later the same day.
The prime minister, however, added that the Cabinet, state executive councils and government services would continue operations. An independent special committee would be formed under an ordinance to advise the king if the emergency should be extended or ended earlier.
In his memo to fellow MPs, Mr Anwar, who is Port Dickson MP and Parti Keadilan Rakyat president, stated that the current provisions were sufficient to halt the spread of COVID-19, including the movement control order (MCO) and conditional MCO (CMCO).

He said an emergency is not necessary.

"The economic crisis is very concerning while unemployment, poverty and gaps increase. An emergency will surely cause the state of the economy to become more perilous,” he noted.

MCO IS SUFFICIENT TO DEAL WITH COVID-19: LIM GUAN ENG

Earlier on Thursday, Mr Lim Guan Eng, who is former finance minister and Democratic Action Party's secretary-general, said the MCO lockdown has been deemed sufficient to deal with the surge in COVID-19 infections.

"How does suspending parliament and arming Muhyiddin with emergency powers help in winning the battle against COVID-19? There are no extra measures under emergency powers that are not already provided under existing laws or the MCO," he said in a statement. 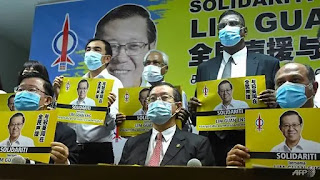 Lim stated that “by suspending and silencing” the Malaysian parliament, the prime minister no longer had to fear that he had lost his parliamentary majority, which has been brought down to 109 out of 220 MPs.

Previously on Jan 9, United Malays National Organisation (UMNO) MP Ahmad Jazlan Yaakub, who represents Machang constituency in Kelantan, announced his withdrawal of support for Mr Muhyiddin. He had earlier quit his position as chairman of the Malaysian Palm Oil Board.

This was followed by fellow UMNO MP, Mohamed Nazri Aziz of Padang Rengas, who also publicly withdrew support for Mr Muhyiddin on Jan 12.

The state of emergency was declared a day after the prime minister announced tighter curbs, including a nationwide travel ban. Five states including Penang, Selangor, Melaka, Johor and Sabah, and the federal territories of Kuala Lumpur, Putrajaya and Labuan have been placed under movement control order (MCO) again from Wednesday until Jan 26.

On Thursday, Malaysia reported 3,337 new COVID-19 cases - its biggest daily jump since the start of the pandemic. The new infections bring the nationwide total to 147,855, while the active caseload stands at 33,989. There were also 15 more fatalities, taking the cumulative death toll to 578.

at January 16, 2021
Email ThisBlogThis!Share to TwitterShare to FacebookShare to Pinterest