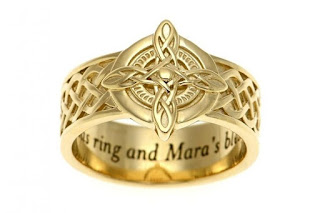 If you played The Elder Scrolls Online, you may be familiar with the Pledge of Mara. It’s essentially marriage in the Bethesda MMO. If you want to bring that element from the virtual world to the real one, now you can. The publisher’s official merch store has what’s called the Ritual of Mara ring.
The ring itself bears the same symbol as the Amulet of Mara, found in The Elder Scrolls V: Skyrim. The design of the symbol is a four-point embossed knot of sorts. And on the inside, the words “with this ring and Mara’s blessing” are engraved. For context, Mara is the Goddess of Love in the Elder Scrolls universe. Non-fans though will likely not appreciate what the symbol means, and may just pass it off as a “cool Celtic design”.
What does stand out is the material that the ring is made of. There are two options, the first of which is 10 karat gold. If you’re tying the knot with someone who also loves the Elder Scrolls, then this will set you back US$1000 (~RM4045) a piece. This sort of matches the price of getting married in The Elder Scrolls Online, which is 1000 Crowns. 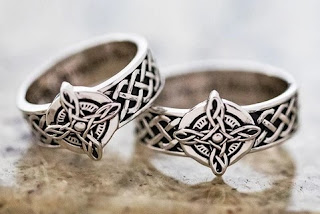 If gold is too gaudy for you, then there’s the Sterling Silver option. It’s a lot more reasonably priced too, at US$85 (~RM344) a pop. Material aside, everything else about the ring is identical.

The gold version of the Ring of Mara is pretty special, because it is only available for pre-order until 14 February. It will then ship sometime in April. The silver ring will not be a limited time thing. But for the month of February, Bethesda is giving a 10% discount for the second ring you pre-order.

at January 22, 2021
Email ThisBlogThis!Share to TwitterShare to FacebookShare to Pinterest