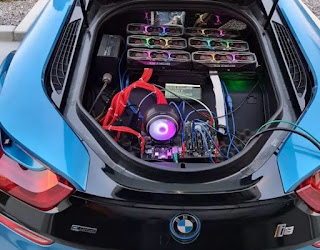 Simon Byrne is a name that is unlikely to raise any eyebrows among normal folks. Mention his name to people in both PC gaming and GPU mining circles, though, and you’re likely to hear them clicking their tongue in disgust as they recall the picture of 100 NVIDIA GeForce RTX 3080 graphics cards, neatly and uniformly arranged, in a mining rig.
Recently, Byrne took it a step further by installing a miniature GPU mining rig – it holds a total of six RTX 3080 cards – inside the boot of his car. Specifically, inside the boot of his BMW i8 hybrid sports car. Then, as if to add insult to injury, when asked why do such a thing, Byrne simply responded by saying “just to annoy gamers”.
We won’t deny that the Byrne’s GPU miner on wheels is pretty to look at, but from a practical standpoint, it’s hard not to think that this setup feels terribly inefficient in the long run. 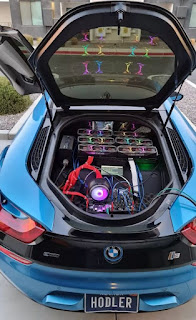 Crpytocurrency mining has been a revival of late, thanks on no small part to Bitcoin soaring exponentially and currently sitting at RM130000 per coin, on average. Byrne, however, isn’t mining Bitcoin but rather, his rig is tweaked to mine Ethereum, an alternative cryptocurrency to Bitcoin, and currently the second most valuable digital coin on the market. With a current average value of RM5300 at the time of writing.

Now, Byrne’s use of his 100-odd RTX 3080 cards is are not illegal by any legal measure of the word, but it is important to remember that supplies for NVIDIA’s Ampere-powered GeForce RTX 30 series are in desperately short supply, and demand for said cards have also been overwhelmingly high.