Cyberpunk 2077 Player Down Nearly 80 Percent On Steam Since Launch 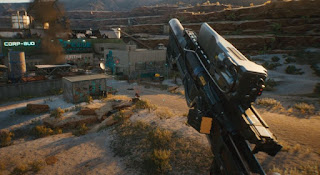 You may probably know this already, but the reception for CD Projekt Red’s flagship title, Cyberpunk 2077, has been less than stellar, primarily due to a plethora of bugs and glitches, with some proving to be game breakers. To that end, it should also come to no one’s surprise that the game has already lost a big chunk of its player on Steam, since its launch.
The statistics of the first-person action RPG was analysed by GitHyp, who showed that interest in the game fell dramatically, with the current number of players just barely hovering at 225000, which is nearly 80% of the players that were actively playing the game at its launch, which was a record-breaking one million players. 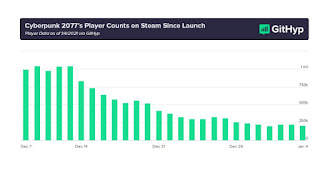 As mentioned, one of the major issues that contributed to the game’s rapid decline in interest was the numerous bugs and gameplay issues that virtually killed the immersion for players. While it can be argued that most games suffer from such issues at launch, it didn’t help CDPR’s case since it delayed the launch of Cyberpunk 2077 no less than three times. All so it could deliver a polished games.

To be clear, the fall in numbers only accounts for players on Steam, and not those on Epic Games Store, GOG, or Google Stadia. Such a loss is not uncommon for single-player titles, but the rapid dwindling of players for Cyberpunk 2077 is clearly an exception; when CDPR’s last major title, The Witcher 3: Wild Hunt launched back in 2015, the game only had 40000 concurrent players, but it held on to half of those players for a month after launch, and eventually saw them dwindle by the same percentage over a period of three months. 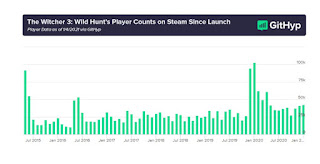 However, the game saw a resurgence in popularity back in 2019, after the Netflix adaptation of the Polish series launched on the streaming service.
at January 08, 2021
Email ThisBlogThis!Share to TwitterShare to FacebookShare to Pinterest
Labels: 80 Percent on Steam, Cyberpunk