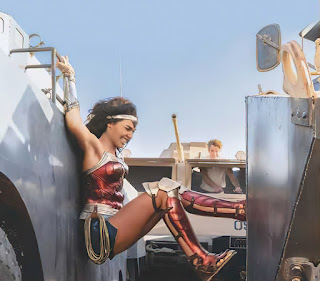 Now I've been reading some tweets regarding WW1984 on twitter. There are major issues on WW that don't sit well with SJW critics.1. While early reactions to Wonder Woman 1984 were generally positive, the film is now facing a lot of controversy and backlash online, with many fans hailing Patty Jenkins’ sequel as the worst pic in the DCEU, which, given its unwieldy track record, is a bold statement to make.Disregarding the lacklustre action sequences, and its numerous plot holes that haunt the coherency of the narrative, folks are also struggling with a certain element involving the return of Steve Trevor. And we’ll warn you now that spoilers lie ahead.
For those who’ve watched WW84, you’ll know that the circumstances involving the apparent resurrection of Trevor were confusing, to say the least. The character suddenly sprang up 30 minutes into the film, where he explained that his soul took possession of a random guy’s body. What makes this even more unsettling is the fact that Diana and Steve proceed to get intimate with each other in a number of scenes, which some viewers have interpreted as a form of sexual assault.
2. Depiction of MuslimsWhat do you think?
at January 01, 2021
Email ThisBlogThis!Share to TwitterShare to FacebookShare to Pinterest
Labels: Dc Fans, Wonder Woman 1984