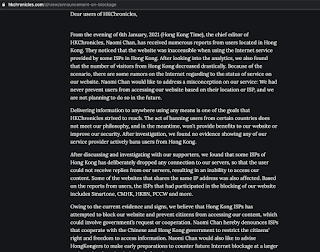 You can Login to this hkchronicles.com

A Call to International Protesters: Join Us to Defeat Tyranny

We are Hong Kong Chronicles, a team of individuals in Hong Kong who are joining to fight for democracy and freedom since June 2019.We originally envisioned the creation of a historical record through the Internet for future HongKongers. However, due to the long-lasting protests and numerous passionates who did this job way better than us, we shifted our focus to develop a convenient, efficient and easy-to-use platform to provide information for protesters and our democracy supporters. With the generous help of local Telegram Channels "Dad Finds Boy" and "Son Finds Parents", we currently covers details to locate police officers, who committed serious crime and brutality towards citizens of Hong Kong, and the supporters of such tyranny.We believe that exposure of these people serves an important role in social movement. Police often acted brutality to citizens because they could hide behind their uniforms, their masks, and their government. Exposing their personal information could rip these curtains apart and reveal their horrific self to the general public. A good example of this was noted in the book The Dictator's Learning Curve: Inside the Global Battle for Democracy. The book mentioned that during the The October 5 Revolution in Serbia, there was a ruthless chief police officer who enjoys torturing young protesters. Serbians responded by creating a poster with the photos of him torturing citizens, alongside his name and telephone number. They posted such information in the shopping malls where his wife will go to, and schools where his children was educated. On the poster, they urge citizens to call the police officer, asking why he was torturing Serbian's future generations. This movement shocked his family, and his family soon became rejected in almost all aspects of society. By putting the supporters of brutality and tyrannical government under the spotlight, the supporters of tyranny could only realised what they have done and how citizens hated their acts.During late 2019, social movements erupted in numerous countries like Indoesnia, Catalonia and Chile. However, we have yet to find a widespread adoption of Internet platforms and technology inside these social movements. Today, we would like to send invitations to our international friends. If you wish to contribute to your country through a new way, please don't hesitate to join us. In Hong Kong Chronicles, we have a self-taught programmer who could help you to establish your own platform, and individuals who was experienced in operation security to provide technical suggestions to prevent you from being identified by local authorities. We could also provide suggestions and assistance in utilisation of Internet for social movements, as we have plenty examples in our country.If you wish to join us, please contact via Telegram: @naomicyy . Previous contribution to your own country's protests are preferred. If you don't have considerable contributions and wish to make one, a Telegram Channel delivering news to your country and the world is a good starting choice.Fight for freedom, Stand with us all.
at January 08, 2021
Email ThisBlogThis!Share to TwitterShare to FacebookShare to Pinterest