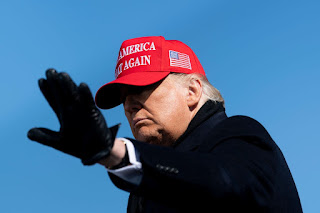 President Donald Trump called for an "orderly" transition of power to a new administration on Thursday (Jan 7), one day after his supporters attacked the Capitol building, ransacked offices and clashed with police.Trump released a two-minute video on Twitter, offering his first concession of the election he lost more than two months ago."Now Congress has certified the results," he said."A new administration will be inaugurated on Jan 20. My focus now turns to ensuring a smooth, orderly and seamless transition of power. This moment calls for healing and reconciliation."Trump also called the riot as "a heinous attack" on the Capitol and said violators would be prosecuted.The attack came after he whipped up his supporters with claims that the election had been stolen, and encouraged them to march on the Capitol building."We're going walk down to the Capitol, and we're going to cheer on our brave senators, and congressmen and women," he said on Wednesday (Jan 6)."We're probably not going to be cheering so much for some of them because you'll never take back our country with weakness. You have to show strength, and you have to be strong."At least four people died in the ensuing clash with Capitol police, including a woman who was shot in the chest by a police officer inside the Capitol building.More than 50 officers were also injured, and police made more than 60 arrests for gun possession, curfew violations and unlawful entry into the building.In a video released on Wednesday afternoon, Trump urged the rioters to go home, but also said "We love you, you're very special."He later justified the violence in a tweet, saying,"These are the things and events that happen when a sacred landslide election victory is so unceremoniously & viciously stripped away."The tweet was taken down and Trump's account was frozen for 12 hours.The remarks echoed Trump's comments after the violent white nationalist demonstrations in Charlottesville, Va., in which he initially said there were "very fine people" on both sides - only to issue a more forceful condemnation after intense backlash to his initial comments.In his remarks on Thursday, Trump said he was "outraged" by the mayhem at the building."To those who engaged in the acts of violence and destruction, you do not represent our country, and to those who broke the law, you will pay," Trump said."We have just been through an intense election and emotions are high. But now tempers must be cooled and calm must be restored."Trump's remarks came as Congressional Democrats were threatening to impeach him if the Cabinet did not remove him via the 25th Amendment.
at January 08, 2021
Email ThisBlogThis!Share to TwitterShare to FacebookShare to Pinterest
Labels: Trump