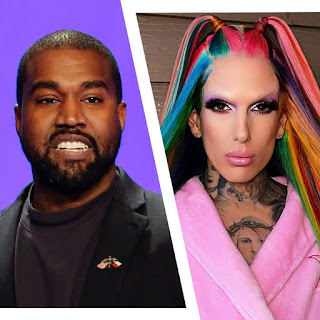 If it was a shock to everyone that Jeffree Star and Kanye West were dating, it was an even bigger shock to YouTube makeup artist, Jeffree Star.

The 35-year-old woke up to his phone blowing up with “a million” texts, phone calls and enquiries from news outlets on 6th January. He told his cameraman that he didn’t know what was going on. “I’m living in this beautiful state. I’m loving life,” he said.
The rumour began on TikTok when a user claimed that West was hooking up with “a big male beauty influencer”. At that point, Kim Kardashian and Kanye West’s marriage was reported to be “on the brink of divorce”.Star posted on Twitter about being “ready for Sunday Service”, which is a reference to West’s famous musical church services. This caused uncertainty as to whether the rumour was true.However, the cosmetics founder was quick to shut down the allegation in a video he released yesterday on YouTube. He claims to be single and is not sleeping with anyone. “I like very tall men,” he added. “Me and Kanye have never hung out, and this whole thing is really funny.”
The makeup star clarified that the rumour started by the user on TikTok was a lie. He also stated that he found the entire situation “very weird”. However Star suspected Kris Jenner of “orchestrating this whole thing” and wished her “Happy New Year sweetie girl,” in his video.
at January 08, 2021
Email ThisBlogThis!Share to TwitterShare to FacebookShare to Pinterest