Earlier in the month, Japanese company Konami published a report on its organisational restructuring. This involved the dissolution of three production divisions, which led to rumours of the company stepping out of the gaming scene entirely. That is not the case, as the company has since denied those allegations.
Video games news outlet Gematsu tweeted a statement by Konami with a message to that effect. In it, the company clarified that it is simply consolidating its Production Division, and not shutting down video game production. 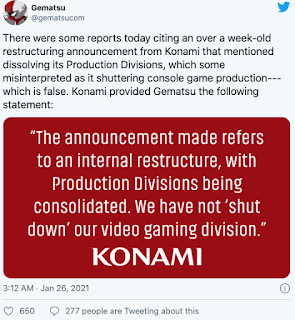 To be fair, it’s not like the speculations were without merit. Beyond the annual PES entries, the last proper video game developed and published by Konami was Contra: Rogue Corps. And it involved a weird overheating mechanic which is very much in contrast to what the series is about – lots of shooting. Going further than that, most of what the company has done has been for the mobile front.

And of course, there’s the IPs that Konami is effectively holding, but doing nothing with. Fans have asked for the company to sell its IPs so that other companies can make use of names like Metal Gear, Silent Hill and Castlevania. But because those names are still so valuable, it’s pretty unlikely that the company will be letting them go any time soon.