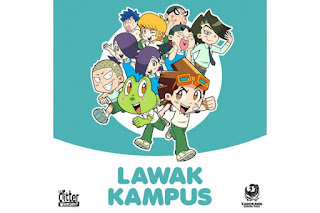 The popular comic series from Kadokawa Gempak Starz, Lawak Kampus is about to be turned into an animated TV series. According to a joint announcement earlier today, local studio Lil Critter Workshop will be responsible to bring the comic series to life.
Crafted by Chong Kah Hwee or more known as Keith to fans and readers, Lawak Kampus made its debut back in 2003. Featuring secondary school life as its background, the comic not only managed to amass a large following in Malaysia with more than 6.5 million copies being sold so far, but has also made its way to Singapore, Indonesia, Thailand, and China.

Even though the upcoming Lawak Kampus animated TV series is a Malaysian-made production, it will be developed to cater to audiences throughout the Asia Pacific region especially kids and families. The announcement today revealed that each episode within the series will be 10 minutes long although there was no mention of an estimated release date as well as the broadcaster.

Back in 2017, Lil Critter Workshop made it into the limelight by being the first homegrown production company to be featured in Netflix through its creation, Hogie The Globetrotter. So, it seems that Lawak Kampus is in a good hand and we look forward to seeing the end result in a not distant future.