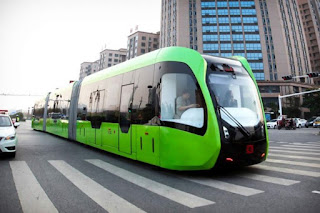 Mobilus Sdn Bhd, a joint venture company established between Ireka Corp Bhd and CRRC Urban Traffic Co Ltd, announced that it has received its first automated rapid transit (ART) system from China. The company says that the pilot testing programme for the road-based self-driving tram is scheduled to commence in Johor Bahru within the first quarter of 2021.
For those unfamiliar, ART is a medium capacity transit system for urban areas that relies on automated driving technology, featuring sensors that are used to scan virtual tracks on the road for automatic navigation. It comes with three carriages that are capable of transporting more than 300 passengers, which can be expanded further to support approximately 500 passengers with an additional two carriages. The vehicle operates on clean sources of energy such as electricity or hydrogen, and could travel up to 70km/h. 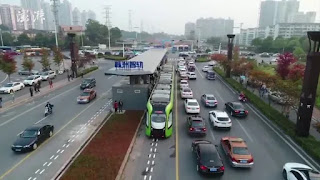 Ireka Group managing director Datuk Lai Voon Hon says that the ART Bus Pilot Testing Programme in Iskandar Malaysia, Johor was originally planned to commence in 2020, but was delayed to this year due to the ongoing pandemic. He revealed the programme will also feature seven other bus manufacturers as part of the showcase. The Malaysia Institute of Transport (MITRANS), an institute under UTM, will also be conducting a technical feasibility study on the ART system during the testing period.

The managing director added that the company hopes to have the project up and running by early 2021. “This will be one of the test lines for the larger Iskandar Malaysia Bus Rapid Transit (IMBRT) project, a comprehensive transit system for Iskandar Malaysia covering a network of more than 2,000km in Phase 1,” he said in a press release. It is also worth noting that Malaysia will be the first country outside of China to potentially adopt this technology. 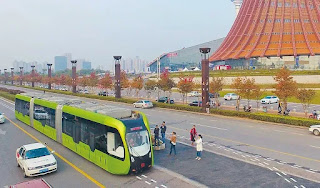 Currently, the ART system is reported to being rapidly adopted in various cities across China. The city of Yibin, Sichuan is the latest location to adopt the system and has recorded more than 25,500 daily commuters on its newly established T1 line. In addition, it is said that the opening of the ART line had also reduced traffic congestion in the city by 20%.