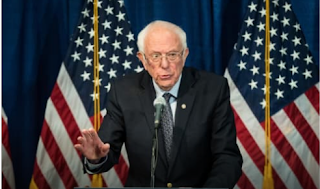 Top tech leaders and other billionaires would be forced to hand over billions of dollars in wealth they’ve gained during the coronavirus pandemic under a new bill introduced by Sens. Bernie Sanders, I-Vt., Ed Markey, D-Mass., and Kirsten Gillibrand, D-N.Y.The “Make Billionaires Pay Act” would impose a one-time 60% tax on wealth gains made by billionaires between March 18, 2020, and Jan. 1, 2021. The funds would be used to pay for out-of-pocket health-care expenses for all Americans for a year. As of Aug. 5, the bill would tax $731 billion in wealth accumulated by 467 billionaires since March 18, according to a press release. If passed, the bill would tax billionaires on wealth accumulated through the end of the year, however.Under the bill, tech and other business titans who have seen their wealth shoot up during the pandemic would take huge charges. Amazon and Walmart, for example, have both seen their stocks grow as Americans increasingly relied on their services during stay-at-home orders during the pandemic.That added billions of dollars in wealth for their top shareholders, Amazon CEO Jeff Bezos and Walmart founding family the Waltons, respectively.Here’s how much some would pay under the bill due to wealth gains between March 18 and Aug. 5, according to a release accompanying the bill:Amazon CEO Jeff Bezos would pay a one-time wealth tax of $42.8 billion.Tesla and SpaceX CEO Elon Musk would pay a one-time wealth tax of $27.5 billion.Facebook CEO Mark Zuckerberg would pay a one-time wealth tax of $22.8 billion.The Walton family would pay a one-time wealth tax of $12.9 billion.Those figures could rise (or lower) as the effect of the pandemic on the billionaires’ wealth changes over the rest of the year.
at January 17, 2021
Email ThisBlogThis!Share to TwitterShare to FacebookShare to Pinterest