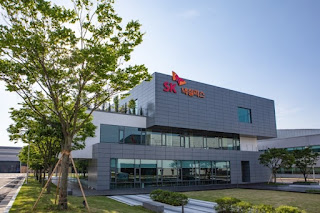 South Korean copper foil manufacturer SK Nexilis will be building its first overseas plant in Kota Kinabalu, the company announced on Tuesday, according to The Korea Times. Copper foil is a key material in the production of batteries for electric vehicles – a burgeoning industry that has seen incredible recent interest from global players including Apple and Baidu.
The South Korean company said it picked Kota Kinabalu and Malaysia because of power considerations. Malaysia has the most stable power supply in Southeast Asia, it said, along with a low electricity cost and a high dependence on hydropower. Kota Kinabalu was also picked because of its abundant land available for factory expansion, as well as convenient infrastructure – access to a port and international airport.
The RM2.3 billion factory will be constructed in Kota Kinabalu Industrial Park, and will begin commercial operations in 2023. It will be capable of churning out 44,000 tons (50,000 – according to MIDA) of copper foil every year, and, when completed, will push SK Nexilis’ total battery copper foil production capacity to 100,000 tons annually. 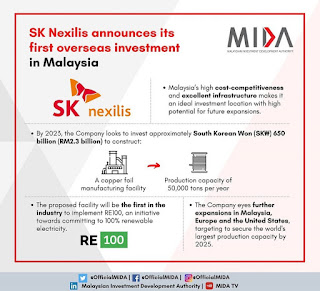 “At the Malaysian plant, we will build facilities that can fully materialise our technology of making the thinnest and widest battery copper foil,” Kim Young-tae, CEO of SK Nexilis, reportedly said. “By building the plant in Malaysia, we will improve cost competitiveness and enhance our commitment to RE100, so we can consolidate our status as the world’s No. 1 supplier of battery copper foil.”

RE100 is a global initiative that has companies commit to operating on 100% renewable energy. That explains SK Nexilis’ reference to hydropower in Malaysia. All in all, Malaysia may be (slowly) turning out to be a key industrial base for the production of electric vehicles.