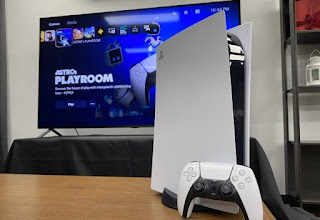 Sony Malaysia will begin accepting pre-orders for PlayStation 5 once again tomorrow, 8 January 2021. The pre-order will be opened through two Sony Store outlets that are located at Suria KLCC in Kuala Lumpur and The Curve of Mutiara Damansara.
The company has noted that the standard opening hours for both stores are 10:00 AM to 10:00 PM. Based on what has transpired during the original pre-order day last November, expect gamers to queue up much earlier to secure their PS5 at both stores: 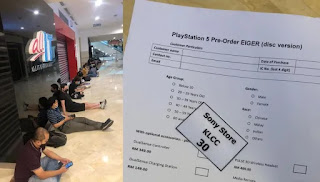 Sony Malaysia has also noted that stocks will be limited, as expected. Additionally, customers are allowed to purchase only one accessory or peripheral for each console that they pre-ordered.
Since both outlets are official Sony stores, the pricing of the console remains true to the official Malaysian price tag that the company has announced before. In case you missed it, the standard PS5 goes for RM 2299 while PS5 Digital Edition which is not equipped with a disc drive can be obtained for RM 1869.
at January 07, 2021
Email ThisBlogThis!Share to TwitterShare to FacebookShare to Pinterest
Labels: Malaysia, Preorders, PS5, Sony