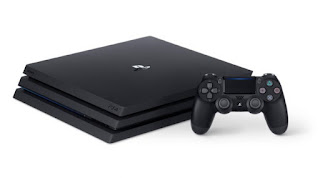 The PS5 has been officially released, even if they are nearly impossible to get. For many console gamers, the preceding PS4 is still an important machine, especially while waiting for the new one to be more readily available. For those who don’t already have it though, the chance to get one may be gone soon.
Twitter user @Cheesemeister3k translated a sign that was put up at a Japanese retailer. The sign states that Sony Interactive Entertainment is discontinuing a number of PS4 models. The list consists mainly of the base model, which may be either the slim ones or the first gen model. But curiously enough, one of the listed models going out of production is the 1TB Glacier White PS4 Pro. 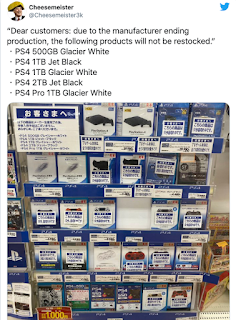 According to VGC, SIE once had a similar line on its US store page for the PS4 Pro. Specifically, it read “There are currently no plans to restock this item in the future”. The line is gone now, but the sighting of something similar in a Japanese retailer reinforces the possibility that the company is phasing out the older console.

Which is a weird thing to do when PS5 stocks are still so limited. But on the flip side, even if the PS4 hardware is getting discontinued, games for it will likely still be made for a number of years more.

at January 04, 2021
Email ThisBlogThis!Share to TwitterShare to FacebookShare to Pinterest
Labels: PS4, Sony