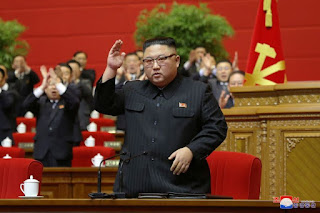 North Korean leader Kim Jong Un called for maximum military power and greater nuclear war deterrence, state news agency KCNA reported on Wednesday, as a rare ruling party congress came to a close after eight days of policy discussions.The Eighth Party Congress comes less than two weeks before U.S. President-elect Joe Biden takes office and amid a prolonged gridlock in talks aimed at ending the North's nuclear and missile programmes in return for U.S. sanction relief."We must do everything we can to increase nuclear war deterrence even further as we build the strongest military capability," KCNA quoted Kim as saying at the conclusion of the congress.Kim said last week he would expand military capabilities to better defend the country and called for "placing state defence capabilities on a much higher level".Since announcing a self-declared moratorium on nuclear testing and intercontinental ballistic missile (ICBM) launches from 2018, Kim has called for continued production of nuclear weapons for his arsenal, launched a series of smaller missiles, and unveiled what would be North Korea's largest ICBM yet at a parade in October.The congress, which ran for eight days in Pyongyang, is the first since 2016, which was in turn the first since 1980.Kim told the party congress last week that his five-year economic plan had failed to meet its goals, blaming international sanctions as well as unanticipated crises including the coronavirus pandemic and natural disasters.Separately, Kim Yo Jong, the leader's sister and a member of the party Central Committee, criticised South Korea's military for monitoring a parade in Pyongyang. The move was an expression of the South's "hostile approach" towards the North, she said in a separate statement carried by KCNA.South Korea's military said on Monday it had detected signs that North Korea held a night time military parade on Sunday for its ruling Worker's Party congress.
at January 12, 2021
Email ThisBlogThis!Share to TwitterShare to FacebookShare to Pinterest