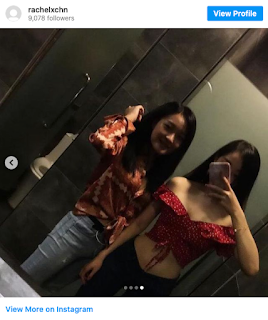 The story too long until u need hours to finish reading.TLDR:Rachel faked an identity claimed as her brother (Daniel) working in SG. Used the fake identity to date with her bestie Kyannn for 2 yrs using a Voice Changer app.Meantime she created multiple fake identities like Sister, Mother etc.Even faking that Daniel is in ICU to make Kyannn cry because she sees her happy.

I've roughly translated it.. apologies if anything is missing because i'm a semi-banana

Kya is just a cheerful and talkative girl. In December 2018, in an event, she got to know one person called Rachel. They exchanged each other's wechat and IG and immediately got to know each other. While chatting they're surprised to know that they share a same birthday, prompting Kya to feel like it's a destiny or fate, so they slowly got closer to each other.

Rachel and Kya became so close, they're now close friends. In conversations, Rachel reveals a tragic story buried inside her heart. Rachel said that her childhood isn't great at all, that her father is an domestic violence abuser, her mother was insane, but luckily she met a godmother who's also a Dato (Cindy) and also her godfather, which always takes care of her, leading her to have a normal environment growing up. She has been staying at her godparent's house since little. Rachel said that the fortune teller told her that she brings wealth to the family, so many people are rushing to want to take her as their goddaughter. Her godmother is a fairly rich person, have a big house, many sports car, which is why Rachel is able to take many pictures of the fortune in her IG.

Besides Kya, Rachel also have 2 close friends, one called Zhen and another called Yip. Zhen have quite a good family background, Yip isn't bad as well, but all of them isn't as rich as Rachel, because she has a very rich godmother and her godfather have a public listed company. Lots of sports car such as BMW, Audi, Mercedes, properties, insurance and all those luxury brands stuff.

Rachel have a godbrother called Daniel. Daniel also shares the same birthday as Rachel, and he's a very successful young man, He did not rely on parent's wealth to make his stand in the world, which is why everyone calls him Daniel, but not Dato's son, or son of a rich person. So then Rachel introduces Daniel to Kya via Wechat. Daniel have been posting stuffs like luxury cars and brands and motivational quote sort of images in his wechat for the past few years.

And so Daniel and Kya were in a relationship with each other. Daniel lives in Singapore, so Kya never had a chance to meet him at all. This is considered online love? Daniel were so gentle and considerate, always chat with Kya until midnight, sometimes even sing for her. He even told Rachel to take good care of Kya so they will be able to maintain a great relationship. He once even made a ginger tea from singapore and then delivers it to Rachel and then Rachel passes it to to Kya.

Story goes back to Zhen, Yip and Kya. They all knew each other's existence, but were never looking eye to eye with each other, because Rachel told Kya that Zhen's personal lives are very complicated. Rachel said that Kya is a very selfish person. Example paying while eating outside, going KTV, buying clothes, and everything is paid by Rachel. Zhen even takes her clothes and pretend as if it were hers. Rachel did not complain anything because her birth mother is a close friend to Zhen's mother, so she just kept quiet and still provide her with an adequate friendship.

Yip on the other hand, is a third party with Rachel's ex. Rachel found out that her ex is cheating on her when he brought Yip to his house to stay overnight, even wearing Rachel's clothes. Rachel were so sad she complained to her boyfriend's parents but were slapped mercilessly by the boyfriend's parents. Rachel said that Yip have already had abortion twice. Sometimes when Yip is drunk, Yip will ask Rachel to fetch her home. Rachel were a good friend to Yip, even gifted her luxury gifts but were treated this way by her.

Daniel introduces Kya to his mother, Cindy. They added each other in Wechat as well. Sometimes, Cindy will send a warm message to Kya, making her feel like the happiest person alive, because she is expecting to have such a warm and lovely family in the future.

Daniel actually has a blood cancer. Day by day the condition of his body seems to get worsen. Every time he has to go to emergency rescue and change of hospitals, making Rachel unable to sleep. Everyday Rachel hears her godbrother's cardiograph sound Rachel will cry uncontrollably because she hears what sound his godbrother is hearing everyday and imagine his feeling (you know, those in hospital reading your heart de.. those dit.... dit.... dit.... sound)

Once, Daniel were in ICU during early mornings. Kya were crying non stop when she heard about it. Cindy asks her to come to the hospitals immediately as she fears that Daniel might not make it. Once Kya knows that Daniel were transferred to a KL hospital, she immediately drives from Penang to KL to meet him. Unfortunately she was not able to even meet him even then.

Daniel kept saying he wanted to meet Kya for many times, but every time there is something that happened so he had to ffk (condition worsens, this and that). Rachel and Cindy both tells Kya that it's really unfortunate but they comfort her nevertheless, making Kya believes Daniel even after a long time.

One year later, Rachel's 21st birthday, also Kya's birthday, Daniel told Kya that he will meet her. Kya of course were happy to be able to meet Daniel after one year of relationship. Who would've guessed, Daniel ffk her again. Kya comforts herself saying that Daniel is not purposely don't want to meet her, but because he's very sick. Daniel gave some gifts to Rachel and ask her to pass it to Kya for her birthday. Kya is only able to cry at night by herself.

Daniel wrote a song to Kya, loosely means that Daniel will keep on fighting the cancer, because there's no one else to protect Kya if he dies.

After numerous encounters with death, Daniel prevails. Who would've thought that the first one to pass away would be Daniel's mother, Cindy. In April 2020, she passed away. She passed away so suddenly, she had a will giving 20% of her inheritance to Rachel. As this is unexpected move from her godmother, (she had no blood relation to Cindy) the whole family starts to argue and cause a lot of trouble.

Okay back to the main point of the story : Kya in some unexpected circumstances suddenly got to know that the boyfriend she has (Daniel) and his mother (Cindy) actually don't exist. All these were fictional characters created by Rachel. Rachel has many wechat accounts in her disposal, and she uses those different accounts to communicate with Kya.

All those Daniel's picture in IG, wechat, is all stolen from a real person's account.

Rachel actually had a fairly normal childhood, unlike what she told Kya. All those luxury items, handbags, sports car is actually owned by Zhen. Zhen is actually the one who lend those stuffs to Rachel and Rachel takes it as if it's her own (different from what she said).

Yip, one of her friends, is actually the most loyal friend Rachel had. Once, Rachel wakes Yip up and tell asks Yip if she can fetch her to the hospital to see a friend (Dylan) that just had a car accident. Yip not aware of anything, fetches her to hospital and waited for around 3 hours. So apparently all this were a part of the evil plan that Rachel has. Remember when Daniel were 'transferred to a hospital in KL'? Rachel actually asks Yip to fetch her to hospital, so she can use 'Daniel's' wechat account and sends location to Kya to make her believe that he's actually in a real hospital. Rachel went to hospital just to take pictures and videos to make Kya believe. Who's Dylan you ask? There's no such person. It's another character created by Rachel. When Yip asks how was Dylan when Rachel enters the car, Rachel cryingly told Yip that Dylan has passed away.

The purpose of Rachel saying bad things about Zhen and Yip is so that Kya will not want to be friends or contact them so her plans would not be exposed.

Unfortunately for her, a stroke of luck (or bad luck for Rachel) is when all 3 of them actually contacted each other and found out that all of this is made up by Rachel. Can you imagine talking to yourselves via few different accounts, things such as good luck, thanks, or even instructing yourselves to do something.

Once this was exposed, Rachel posts an apology message to each one of them, Kya, Yip and Zhen.

Moral of the story : Be careful who you befriend.. because they might not even be a real person

Edit : they found this out because Kya found the facebook of the guy who had his picture (Daniel's picture) misused by Rachel. Kya contacted the guy and he denied ever in a relationship or having wechat.

at January 05, 2021
Email ThisBlogThis!Share to TwitterShare to FacebookShare to Pinterest
Labels: Stories