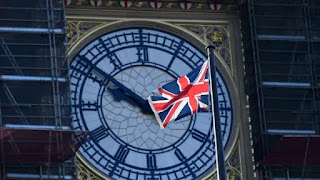 Britain left the European bloc’s vast single market for people, goods and services at 11 p.m. London time, midnight in Brussels, on Thursday, in the biggest single economic change the country has experienced since World War II.A new U.K.-EU trade deal will bring new restrictions and red tape, but for British Brexit supporters, it means reclaiming national independence from the EU and its web of rules.Prime Minister Boris Johnson, whose support for Brexit helped push the country out of the EU, called it “an amazing moment for this country.”The historic moment passed quietly, with U.K. lockdown measures against the coronavirus curtailing mass gatherings to celebrate or mourn. Brexit, which had dominated public debate in Britain for years, was even pushed off some newspaper front pages by news of the huge vaccination effort against COVID-19.The trade agreement sealed on Christmas Eve after months of tense negotiations ensures that the two sides can continue to buy and sell goods without tariffs or quotas. But companies face sheaves of new costs and paperwork, including customs declarations and border checks.The English Channel port of Dover and the Eurotunnel braced for delays as the new measures were introduced.
at January 01, 2021
Email ThisBlogThis!Share to TwitterShare to FacebookShare to Pinterest