Why Xi Jinping govt is after Alibaba and Jack Ma, the poster boy of China's tech dreams 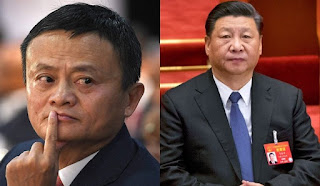 The rise to fame of Jack Ma and the company he founded, Alibaba, was every Chinese favourite tech story. The English teacher's rags-to-riches story gave wings to China's tech dreams. However, the same man and his internet empire's two pillars—Alibaba Group and Ant Group—have been slapped with an anti-monopoly investigation by Chinese regulators on Thursday.

According to the official version that has appeared in The People’s Daily, the probe is a natural byproduct of development and "wild growth in markets, needs to be curbed by law" adding that "anti-monopoly has become an urgent issue that concerns all matters."

The fallout between the Chinese government and Alibaba became public soon after the world's biggest-ever IPO, of Ant Financial on Hong Kong and Shanghai exchanges, that was spiked by Chinese regulators days before its launch in November. Record-breaking IPOs are not new for the company. Alibaba listed in New York in a world-record $25 billion offering in 2014.

The Chinese official line was that the $37-billion IPO had been frozen until the group complied with the government's regulations that went into effect on November 1, including fixing capital shortfalls.

Ant Group, in which Ma is the largest shareholder, is now the world-largest digital payments platform, claiming 731 million monthly users on the Alipay app. It is pertinent to recall that more than 90 per cent of the revenue Alibaba receives is in the domestic market.

Why the China probe?

There's more to it than meets the eye. The scrutiny has arisen out of a personal discord between Chinese president Xi Jinping and Jack Ma.

Coincidentally, the halting of the IPO came only days after Ma launched a public attack on Chinese regulators and therefore, also insulting President Xi during a public address.

The November share sale was set to see Ma's wealth bulge to more than $70 billion in a record-breaking listing of the group's Ant Group financial arm in Hong Kong and Shanghai.

On the face of it, it looks like the ever-charismatic and ebullient Jack Ma has disappeared from the spotlight after the dressing down. Reportedly, he has been advised by the government to stay in the country.

In a country where getting rich risks catching the attention of the powerful, a probe into the Alibaba Group and its billionaire founder is not a surprise per se. But what is new is the probe is in line with the anti-monopoly draft rules for online platforms that the country unveiled recently. The Anti-Monopoly Law aims to prevent anti-competitive practices in the internet space, including unfair price behavior, below-cost and tie-in sales, and unreasonable trading conditions.

With the draft rules in public domain, a report by Morgan Stanley had aptly predicted that the norms could hit hugely successful internet companies in China like Alibaba, Tencent, Pinduoduo, JD.com and Meituan.

The pressure on Ma is likely to be the first step towards a broader effort to rein in an increasingly influential internet sphere. “It’s clearly an escalation of coordinated efforts to rein in Jack Ma’s empire, which symbolized China’s new ‘too-big-to-fail’ entities,” Bloomberg quoted Dong Ximiao, a researcher at Zhongguancun Internet Finance Institute, in its report. “Chinese authorities want to see a smaller, less dominant and more compliant firm.”

The report goes on to add that it won't result in the downfall of Ma. But the scrutiny is in tandem with China's efforts to rein in technology moguls, increasingly perceived as a threat to the political and financial stability President Xi Jinping prizes most.

The probe against Alibaba Group, coincidentally, comes in a year of anti-trust cases against the Big Four—Google, Apple, Amazon and Facebook—around the world.

As opposed to other countries, Chinese internet space was closed to the Big Four. Instead, the government regulated the space in such a manner that it only allowed Chinese companies to thrive in their internet world. And thus was born Weibo, WeChat and Baidu—China's social media equivalents.

But now, China is attempting to put checks on the growth of the same companies that it watered. As Tim Culpan writes in Bloomberg Quint, "Alibaba’s 20-year rise to supremacy is due in no small part to government policies, which protected and coddled the now-booming internet sector. Under the guise of national security, successive leaders have implemented censorship, foreign-ownership restrictions and other limitations that stamped out competition from overseas."

Reportedly, Ma is now a toned down man. According to the Wall Street Journal, Ma himself had already offered to hand over slices of Ant in what looks like a peace offering to Beijing before the IPO was pulled. But it remains to be seen what the Chinese government wishes to do of companies that it helped grow to exponential heights.

at January 04, 2021
Email ThisBlogThis!Share to TwitterShare to FacebookShare to Pinterest