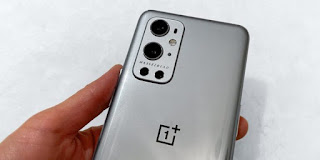 Live images featuring an alleged prototype of the OnePlus 9 Pro have surfaced online, thanks to Youtuber Dave2D. This time around, the phone’s rear case exhibits a different camera array, unlike the one seen in the earlier leak that was reported a few weeks ago.
As seen in the photos, this version of the phone sports two prominent larger cameras sitting vertically above two horizontal smaller sensors within the housing. What’s even more interesting is the Hasselblad branding sandwiched between them. This suggests that OnePlus may have partnered with the Swedish company to include some form of enhancements or technology to the phone’s cameras.

For those unfamiliar, Hasselblad is one of the industry leaders in medium format camera production which are favoured by photography professionals. Medium format cameras are equipped with larger sensors than full-frame ones, enabling them to capture more detail and tonal range, as well as a shallower depth of field for portrait-based shots.

As to how Hasselblad would incorporate its medium format photography into a mobile device is anyone’s guess, at least for the time being. Of course, provided that this OnePlus 9 Pro prototype is to be believed. Hopefully we’ll get some details from the smartphone maker when it is finally ready to officially unveil the phone sometime soon.