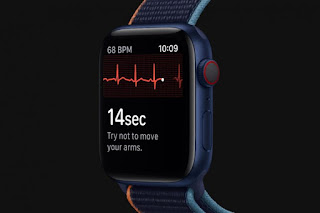 When Apple introduced the Apple Watch Series 4 in 2018, one of its most touted features is the electrocardiography (ECG) app which provides advanced insights in regards to the heart for users. The feature has since become a standard on Apple Watch Series 5 and Series 6 but the feature is not available to Malaysian users.
Given that the ECG app is being considered as a tool to monitor medical conditions, its usage does require approval from authorities and that does take some time to be completed. In fact, the ECG app, as well as the irregular heart rhythm notification, took several years before they received the clearance from the US Food and Drug Administration and were only rolled out to Apple Watch Series 4 several months after its US release.

In other words, regulatory requirements generally prohibit the ECG app from being made available for Apple Watch owners in Malaysia. However, that might change soon though according to the listing on the Medical Device Authority Register (MDAR) that belongs to the Ministry of Health (MoH).

As discovered by the popular tech blogger, Xavier Naxa, both the Apple Watch and iPhone portions of the ECG app were registered on MDAR on 1 February 2021 and valid until 31 January 2026. Interestingly, both of them were registered not under Apple’s name but by a company called Nyprax Business Solutions. 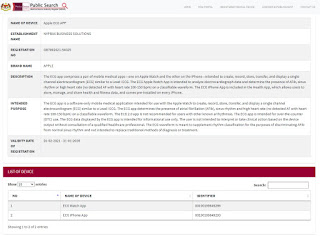 MDAR described the company as an authorised representative, distributor, and importer. Further web searches showed that Nyprax Business Solutions is apparently the local arm of Nyprax Pharma based in Singapore and offers regulatory consultancy services for pharmaceutical products and medical devices.

Aside from the Apple ECG app, MDAR showed that there are 441 other products of various nature that have been registered under Nyprax Business Solutions’ name. So, basically what Nyprax does is help companies go through the regulatory process for their medical products which mirrors what some of the tech product distributors would do through SIRIM on behalf of the product manufacturers.

Meanwhile, Apple has declined to comment on this story though. Hence, we are not able to obtain the actual launch date of the ECG app in Malaysia although historically, the feature is usually delivered through a software update, just like how watch OS 7.3 has enabled the ECG app for Japan, Mayotte, Philippines, and Thailand late last month.

So, if the MDAR listing really indicates that Apple has finally managed to obtain approvals from the Malaysian authorities for its ECG app, it seemed rather possible that the feature will finally be unlocked for local users in the next watchOS update which has just entered the beta stage earlier this month.