The Oxford/AstraZeneca vaccine fails to prevent mild and moderate cases of the South African coronavirus strain, researchers said Sunday.The University of Witwatersrand, Johannesburg, which conducted the trial, said in a statement that the vaccine "provides minimal protection against mild-moderate Covid-19 infection" from the variant.But in a full paper due to be published on Monday, AstraZeneca said that none of the 2,000 participants developed serious symptoms.That could mean it will still have an effect on severe disease, although there is not yet enough data to make a definitive judgement.The data, which has not yet undergone peer review, "appear to confirm the theoretical observation that mutations in the virus seen in South Africa will allow ongoing transmission of the virus in vaccinated populations," it said."Protection against moderate-severe disease, hospitalisation or death could not be assessed in this study as the target population were at low risk."But the vaccine developers in Britain said informally the results offered some hope that the vaccine could prevent deaths from the variant."We may not be reducing the total number of cases but there is still protection against deaths, hospitalisations and severe disease," said Sarah Gilbert, who led the development of the vaccine with the Oxford Vaccine Group.It could also be "some time" before they determine its effectiveness for older people in fighting the strain, which is a growing presence in Britain, she told BBC television."We might have to put it together from a number of studies," she said.Researchers are currently working to update the vaccine, and "have a version with the South African spike sequence in the works" that they would "very much like" to be ready for the autumn, she added.UK vaccines minister Nadhim Zahawi said the government's strategy to combat the spread of the strain was to continue with its mass vaccination programme "as rapidly as possible" as well as "hyper-local surge testing" where it is detected.Britain is in the midst of a massive vaccination drive, which it sees as its way out of one of the worst outbreaks in the world that has seen more than 112,000 fatalities among those testing positive for the virus.
It has so far vaccinated more than 11 million people using either the Pfizer/BioNTech or Oxford/AstraZeneca shots. 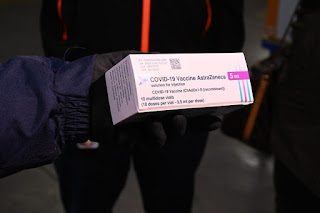 The AstraZeneca vaccine has been the source of an ugly row with the European Union, which is angry that the Anglo-Swedish firm was unable to meet the delivery target agreed with Brussels.France, Germany and Switzerland are also among countries to recommend the vaccine not be used for the elderly due to a lack of data.
at February 08, 2021
Email ThisBlogThis!Share to TwitterShare to FacebookShare to Pinterest