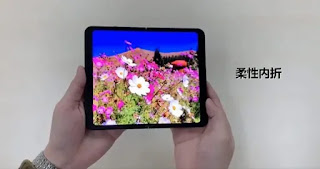 Foldable smartphones have not become the norm for the regular consumer just yet, but that isn’t stopping manufacturers such as China’s BOE from innovating the foldable display technology. The company recently demonstrated a new 360-degree flexible screen that is able to be folded inwards and outwards, suggesting a potentially new multi-mode foldable phone approach.
As seen from the demonstration – a gif animation shared by Digital Chat Station on Weibo and later shared on YouTube by SparrowNews – BOE shows off the new display tech via a prototype phone that can fold inwards ala clamshell, assumingly for storage purposes. When unfolded, it is able to function as a tablet, much like the Samsung Galaxy Z Fold and Huawei Mate X series. Lastly, the device can also be folded outwards from tablet mode, transforming into a familiar smartphone form which utilises only one half of the display.

According to MyDrivers, BOE is said to adopt a “multi-neutral layer model design” for its new display and multi-mode foldable phone approach. This effectively reduces the stress of flexible outward and inward foldings, as well as reduces the possibility of causing creases from each fold. The report added that the company claims the display is able to last approximately 200,000 folds throughout its use.

Keep in mind that the foldable phone unit used by BOE in the demonstration is merely a prototype, therefore it lacks features such as cameras and so on. At this time, no smartphone makers have confirmed to be adopting this technology or multi-mode foldable approach.

The future of non-conventional smartphones is looking to be more interesting as of late, thanks to the recent display technology innovations. Aside from foldable screens, brands such as OPPO and LG are also exploring different approaches for their future products, namely rollable displays.

As for whether which approach would soon dominate the smartphone market in the foreseeable future remains to be seen. And that realisation will also take some time as the prices of such devices are still within the premium range, which – as mentioned earlier – is still far from being affordable for most consumers.