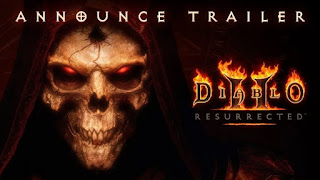 Diablo 2 was a game that defined its genre. And Diablo 2: Resurrected is the remake of that 21-year old game. This announcement confirms a previous report on a possible remake of the classic dungeon crawler ARPG.  And it will be doing so sometime this year.
The trailer for Diablo 2: Resurrected shows what looks to be a very faithful recreation of the classic title. Graphics have been given a new 3D coat of paint, while the gameplay remains very recognisable. According to PC Gamer, the remake will also include the Lord of Destruction expansion.

Though if you remember Warcraft III: Reforged, a Blizzard remake may be the last thing that you want. The new person overseeing the Diablo series, Rod Fergusson, tells PC Gamer that while the Diablo 2: Resurrected is built on the original’s code, it will exist as a separate entity. This means that you can continue to do things on the original that the remake may not necessarily support.

Which is good news, but it doesn’t end there. In addition to PC, Diablo 2: Resurrected is also making its way to the Nintendo Switch, PS4, PS5, and Xbox Series X. No mention of cross platform play, but there will be cross platform progression saves. The game will be out sometime this year, but no exact date just yet.