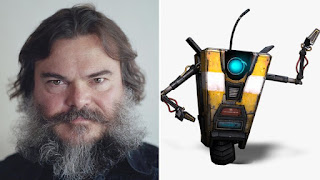 Following two strange casting choices for the Borderlands movie, finally comes one that makes some semblance of sense. Jack Black has been cast for the movie, and he will be playing the wisecracker wannabe robot Claptrap.
Now, anyone who has played any instalment of the Borderlands series should know who or what Claptrap is. But for those who don’t, Claptrap is a recurring character archetype in the series, officially designated CL4P-TP. Across the games, its lines are supposed to be sarcastic, but fall flat more often than not.

It’s definitely a role that a comedian like Jack Black can play well. Kevin Hart too, if he wasn’t cast as Roland instead. In fact, it’s by far the casting that makes the most sense. But at the same time, would you really want a successful comedian to play a role of, well, a comedian that bombs every joke?

Having first cast two of the playable characters, the casting team have gone to cast two supporting roles in a row now. It remains to be seen who will play the remaining two main characters, Mordecai and the Brick. It would probably be safe to expect another set of curveball casting, with the current 50% rate that it is at.